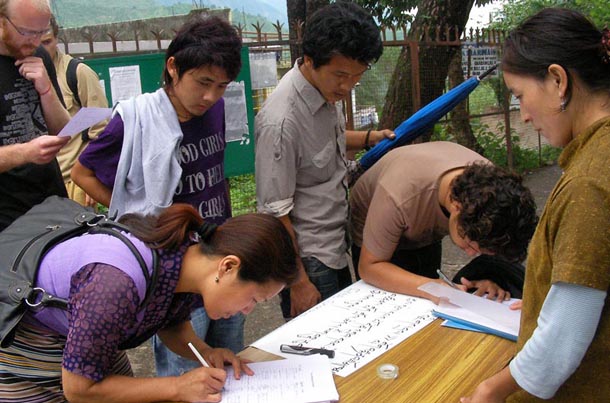 Paris: Reporters Without Borders has given the Chinese authorities a petition calling for the release of Tibetan documentary filmmaker Dhondup Wangchen, who has been held since 23 March 2008 and is seriously ill with hepatitis B, which is not being properly treated. According to recent reports, he is now in a prison in Xining, the capital of Qinghai (a province adjoining Tibet).
At the time of his arrest, Wangchen was completing a documentary about Tibet that was shown to foreign journalists in Beijing during the Olympic Games. He may be tried on charges of "separatism".
“There is an urgent need for the competent authorities to heed the appeal made by thousands of citizens around the world on behalf of a man whose only crime was to have filmed interviews,” Reporters Without Borders said. “The government should take account of Dhondup Wangchen’s state of health and free him on humanitarian grounds.”
Reporters Without Borders handed in the petition today to the Chinese embassy in Paris. It was signed by 13,941 people, who included Tibetans, Indians, westerners, and eight Australian parliamentarians. Wangchen’s wife, Lhamo Tso, who is a refugee in northern India, collected several thousand signatures with the help of The Tibet Post (www.thetibetpost.com).
See Lhamo Tso’s campaign video: http://www.dailymotion.com/relevance/search/Dhondup+Wangchen/video/x9zgcf_petition-pour-la-liberation-de-dhon_news
Li Dunyong, a Chinese lawyer hired by the family to defend Wangchen, is meanwhile being denied access to him. Li has allowed to see him only once since the start of the year – in April. Like many human rights lawyers in China, he is being harassed by the government, which is threatening to rescind his licence if he does not drop the case.