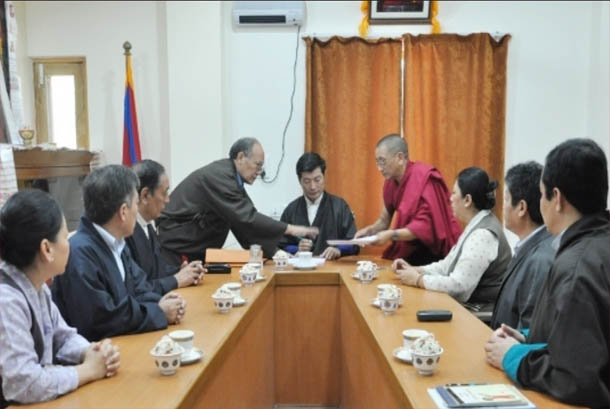 Dharamshala: - September 27, 2012, Dr Lobsang Sangay, the democratically-elected leader of the Central Tibetan Administation (CTA) ratified the recent amendments made to the Charter of Tibetans in Exile to change the official title of Kalon Tripa to Sikyong or Tibetan "political leader."

"The move to bring a motion on charter amendment to change the title of Kalon Tripa to Sikyong in the Parliament was discussed in the Kashag. The Parliament gave its unanimous approval to the charter amendment. We consider it as a historic transition and the need of the hour," Kalon Ngodup Dongchung told Tibet TV after the ceremony.

The 15h Tibetan Parliament-in-Exile unanimously approved the charter amendment during its fourth session held from 14-22 September.

The name change has been effected following His Holiness the Dalai Lama's speech on August 8, 2011. Following the devolution of his political authority to the democratically-elected Tibetan leadership, the Tibetan spiritual leasder had said that he was handing over the political leadership he inherited from "Sikyong Taktra Rinpoche" to "Sikyong Lobsang Sangay." Sangay was elected in the third direct elections for the Kalon Tripa held in March 2011.

However, after this amendment, title "Kalon" or minister for the remaining seven members of the Kashag (Cabinet) the highest executive office of the CTA amongst the three democratic pillars will continue to remain the same.