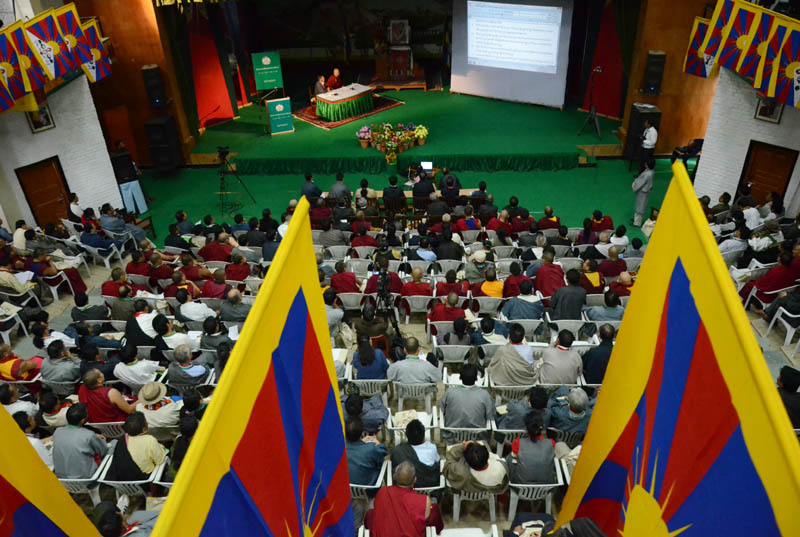 Dharamshala: As the four-day special general meeting of Tibetans concluded on Friday September 28th in the exile community of Dharamshala, India, His Holiness the Dalai Lama, the spiritual leader of Tibet received a session of prayers for His long life at the main temple, by a devout gathering.

Appealing for greater international recognition and intervention amid the worsening situation in Tibet, the Parliament in Exile forged 31 recommendations during the four day meeting. Such positive recommendations range from and observe international, Indian, and Tibetan approaches to the on-going crisis in Tibet, as the staggering number of self-immolations of Tibetans surpassed 50 this year.

Having met His Holiness before the prayers, Lobsang Sangay and the Tibetan parliament briefed His Holiness about the meeting, to a positive response. Concluding the final day of the meeting, Sikyong (political leader) Dr Sangay stated:

"We will continue to approach the international community and share with them the importance of the issue of Tibet, and especially the unfolding tragedy inside Tibet".

"In the last 60 past years, His Holiness the Dalai Lama has led us remarkably and gained international prominence and support for the Tibet issue. This has been little more than a year after the transfer of political authority [to the parliament in exile] and we feel it's a great honour to organise a long life prayer. His Holiness was pleased with the outcome of the committee".

Due to the lack of positive response from the Chinese Government, this year also witnessed the resignation of the Tibetan envoys. The meeting called on the Kashag to resume dialogue among the Chinese community, as well as greater awareness of the middle-way approach.

Concluding the speech, Lobsang Sangay stated: "What we really want to see is concrete action on the part of the international community. Really press the Chinese government. We live in hope".

The revered spiritual leader of Tibetans, the Dalai Lama - aged 77, received heartfelt adoration from the gathering in the Main Temple of Dharamshala, who prayed for His long life and longevity. Members of the CTA, including Lobsang Sangay, as well as revered Tibetan spiritual leaders and hundreds of devout followers attended the prestigious ceremony. Watching the Tibetan Parliament democratically develop and grow over the past year under the guidance of new leader Dr Sangay, must certainly fill His Holiness with hope and joy.