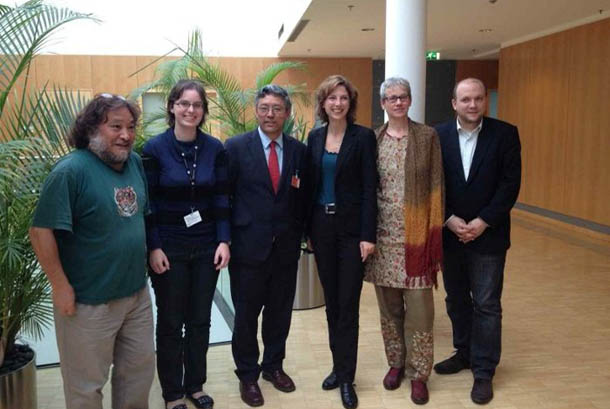 Berlin: - German Parliamentarians pledged to highlight the issue of 17-year-old Jigme Dolma who was sentenced to three years imprisonment by the Chinese authorities for staging a peaceful demonstration in eastern Tibet.

His Holiness the Dalai Lama's Representative Mr Tseten Samdup Chhoekyapa this evening briefed the Tibet Discussion Group in the German Parliament about the present situation in Tibet.

Mr Chhoekyapa especially highlighted 17-year-old Jigme Dolma's case. She staged a peaceful protest on June 24 in the main market of Kardze (Chinese: Ganzi) County, Tibet throwing leaflets in the air and called for the return of His Holiness the Dalai Lama, freedom in Tibet and the release of Tibetan political prisoners.

Jigme Dolma was severely beaten by the Chinese security personnel and is believed to have sustained major injuries to her arms and legs.

Kandzi County People's Court sentenced Jigme Dolma to three years imprisonment under the charge of ‘Splitting China' on 25 August. Her whereabouts is unknown.

The German Parliamentarians said that they would raise the imprisonment of the teenage Tibetan girl with the German and Chinese governments. They also expressed their concern about the 51 Tibetans who have self-immolated.

Mr Chhoekyapa said that the main reasons why 51 Tibetans have self-immolated are due to the Chinese government's systematic repression of Tibetan religion, language and culture, and forced resettlement of Tibetan nomads in Tibet.

He said His Holiness the Dalai Lama and the Central Tibetan Administration have made repeated appeals to the Tibetans to refrain from such drastic actions.

He also briefed the German Parliamentarians of Tibet Bureau's UN outreach work with Foreign Diplomats and UN officials in Geneva.

Germany and China will hold its annual human rights dialogue soon in Germany.