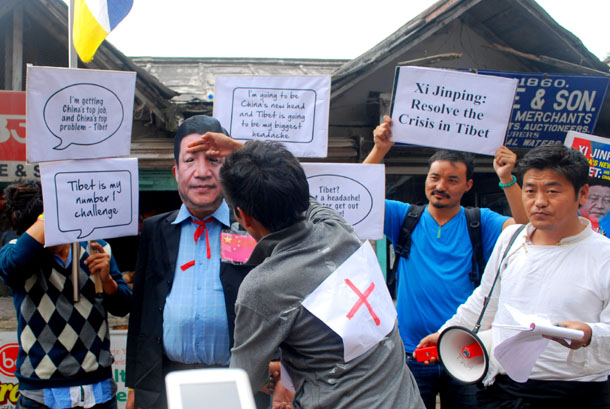 Call on new generation of Chinese Leaders to acknowledge policy failures and seek just resolution to solve the crisis in Tibet.

Dharamsala - Tibetans and Tibet campaigners on five continents are today throwing down the gauntlet to Chinese Communist Party leader-in-waiting Xi Jinping, and issuing him with a Tibet Challenge: to acknowledge four generations of policy failures and seek a just solution to the occupation of Tibet.

In a matter of weeks(1) Xi Jinping and the 5th generation of Chinese leaders will inherit China's illegitimate rule over Tibet; rule that despite six decades of unfettered control, has left Tibetans resolutely opposed to China's rule(2).

Activists from Students for a Free Tibet, India and Regional Tibetan Youth Congress, Dharamsala, joining this global day of protest action, staged a political street theater in the McLeod Square.

The act underlined the ongoing crisis in Tibet and branded Xi Jinping as the 5th generation Chinese leader who must resolve the crisis in Tibet. Moreover it also condemned the Chinese government and its leaders for over 60 years of colonial rule in Tibet.

"Xi Jinping and the 5th generation can either resolve the Tibet issue swiftly and peacefully, or face a growing Tibetan resistance that threatens to undermine the very stability and endurance of the 5th generation of the Chinese Communist Party," said Dorjee Tsetan, National Director of Students for a Free Tibet, India. "Xi Jinping's challenge is a people and a nation as united and undiminished in their spirit and resistance to China's rule since the day the People's Liberation Army invaded Tibet over 60 years ago."

"China's Tibet policies are a failure. Four generations of China's leaders have attempted to quell unrest in Tibet through successive crackdowns and unsustainable economic subsidies, which - far from bringing about the stability they seek - have served to exacerbate Tibetan grievances and created widespread resistance all across Tibet," said Thupten, President of the Regional Tibetan Youth Congress, Dharamsala.

A global online press conference via Google+ will also be held where a timely new report titled Xi Jinping's Tibet Challenge exposing China's failed policies in Tibet, policies that have been the direct cause of over 50 Tibetan self-immolations in recent years will be released. The conference will also be streamed live on www.XiJinping-TibetChallenge.org, at 5 pm Beijing local time, 2.30 pm Indian time.

Tibet movement leaders will speak at the global online press conference addressing the Tibet challenges facing Xi Jinping as China continues to maintain its occupation through Three Pillars of Coercive Control: Military Occupation, Colonial Rule, and Fear and Intimidation. Speakers will also contextualize the growing Tibetan resistance at this time of great political change and uncertainty in China.