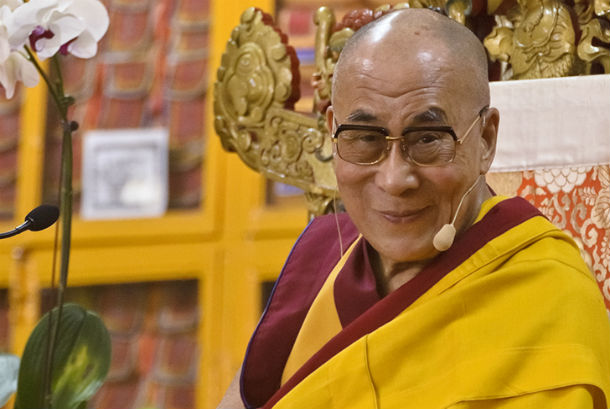 Dharamshala - Continuing with the third of four days of teachings, His Holiness the Dalai Lama of Tibet granted greater depth into Atisha's "Lamp for the Path to Enlightenment", given at the request of a group of Taiwanese devotees.

Having so far introduced Buddhism and its role in Tibet, taught on points such as how to pursue one's path, one's reliance on their guru, dependent origination within the Four Noble Truths, and the impermanence of death, His Holiness continued His teaching on the 11th century text. Crowds of over 2000 gathered in the main temple (Tsuklakang) on Wednesday 3rd of October to witness the revered spiritual leader speak.

Opening the teaching after a series of prayers, His Holiness re-iterated that it is important to understand what the teachings teach:

"When people ask what the teachings are, we should use one's own mind to understand the Dharma well" He stated.

"Most people are rather biased when it comes to scripture study"

Drawing upon His characteristic good humour, His Holiness joked at one point with the Taiwanese translator, who struggled at one point to recall what His Holiness had just taught; laughing that this had once happened in a Tibetan meeting before. ‘The previous year's minutes were requested during the meeting' His Holiness recalled, and the response by the official responsible was that he couldn't possibly read what had been written last year, sending the audience in the temple, including the Taiwanese guests, into peals of laughter.

The Dalai Lama emphasised to the gathering the need to actually practice religion, not simply to attend temples or state one's beliefs with words. Drawing upon all religions and beliefs, His Holiness added:

"If you carry out the will of God, you should be just and sincere".

The spiritual leader of Tibet delved into the process of attaining higher rebirth; understanding the nature of suffering, and how to avoid non-virtuous actions. Points included that individuals should be giving and generous, as well as patient and attentive to prayer. Practice can also be divided into two parts on this subject: attention to the aspects during meditation, and familiarisation through post-meditation sessions. "We need to familiarise out minds with the teachings" He added.

Regarding faith, His Holiness stated:

"Whenever you don't put in effort, your faith will not grow". Practice was the key to this, He said.
Accumulating merit, purifying negativities and increasing these merits through rejoicing were three points that His Holiness re-iterated during the teachings. He also drew upon the theme of suffering, and the notion of cause and effect.

The final in the series of four days of teachings will continue on October 4th 2012 in the Main Temple; Dharamshala. A live webcast, followed by translations into Chinese, English and Russian languages is available on: http://dalailama.com/webcasts/post/255-lamp-for-the-path-to-enlightenment.