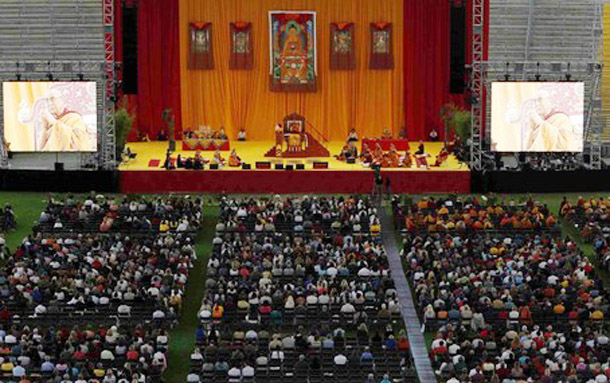 FRANKFURT - Exiled Tibetan spiritual leader His Holiness the Dalai Lama called for worldwide cooperation to fight the effects of the economic crisis.

The Tibetan Buddhist leader said the global downturn showed "how our world is really small" and urged countries to take concerted action.

"We have to think globally," he said, speaking at a conference on the economic crisis in Germany's financial capital Frankfurt.

His Holiness the Dalai Lama, who lives in exile in India, also said urgent measures were needed to fight global warming and close the gulf between rich and poor.

"We don't need just nice talking, we must take action," he told an audience of several thousand gathered in a football stadium.

The spiritual leader, who fled Tibet after a failed uprising in 1959 against Chinese rule, was taking part in the conference on the economic crisis organised by several groups including Germany's Buddhist Union.

Also speaking at the gathering, a businessman and an economist specialising in ethics denounced the "greed" and "selfishness" of the modern economy.

A young couple who had travelled to see the Dalai Lama from the southwestern city of Heidelberg praised his "wise words", but added: "He is not saying anything extraordinary."

Kristina, a 27-year-old teacher, hailed the Tibetan leader as a figure of "particular influence" but lamented what she described as a downbeat atmosphere at the event.

Others at Saturday's conference voiced anger at the financial crisis.

Tom Waldmueller, 48, said: "The current crisis was predictable, all the bankers knew the bubble would burst one day."

But the world would learn from its mistakes, he added.