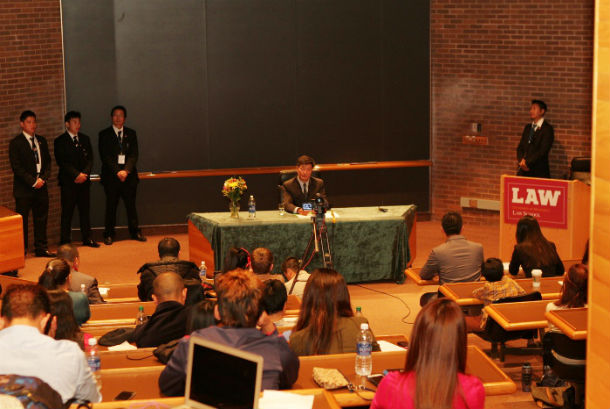 Minneapolis: - The political leader of Tibetans, (Sikyong) Dr. Lobsang Sangay paid his first official visit to Minnesota on October 12. He was greeted at the airport by Namgyal Dorjee, President, along with the board members of the Tibetan American Foundation of Minnesota ( TAFM) and the members of the local Tibetan community.

His first event in Minnesota was a dialogue with 200 Chinese, Tibetan and other students at the University of Minnesota Law School. This student led initiative touched on topics ranging from reliable media sources to the recent changes in political structure of the Chinese government and what it signifies for the Sino-Tibetan dialogue.

In his address, Sikyong Dr Lobsang Sangay presented a brief but detailed analysis of the current state of Sino-Tibet relations and the "middle-way" policy of the Central Tibetan Administration.

Dr Sangay said "genuine autonomy for Tibet within China and the Chinese Constitution does not challenge Chinese sovereignty."

The Sikyong also discussed the lack of dialogue between Chinese authorities and Tibetan envoys, stating that between 2002 and 2010 nine rounds of discussions were held and added that since then, no dialogues have taken place.

He also talked about the deteriorating situation inside Tibet, which prompted 54 self-immolations by Tibetans inside Tibet. "Tibetans feel repressed and are choosing to die," he said, adding that there was "no freedom of speech and expression in Tibet ".

He stated that the Central Tibetan Administration had issued several statements asking Tibetans in Tibet to refrain from taking such drastic actions. However, he argued that Tibetans must show solidarity and support the demands of the Tibetan people inside Tibet, for the return of His Holiness the Dalai Lama to Tibet and freedom for Tibetans.

Addressing the Tibetan community the next day at the Lugnyi Phuntsok Khang community center, Dr Sangay reiterated his promise to fulfill the wishes of His Holiness the Dalai Lama and the Tibetan people, while expressing concern for the escalating situation inside Tibet as a result of the wave of self immolations.

More than 600 Tibetans from all over the metro area came to Sikyong Dr Lobsang Sangay's address.

Sikyong Dr Lobsang Sangay also visited the Tibetan Cultural School and met about thirty Tibetan youths. He spoke to them about the importance of education in paving the way for a brighter future and how the youths have a responsibility of engaging in Tibetan issues to prepare for future leadership.

(With inputs from Tenzin Nordon, Kelsang Phuntsok and Tenzin Khando from Minneapolis, Minnesota.)