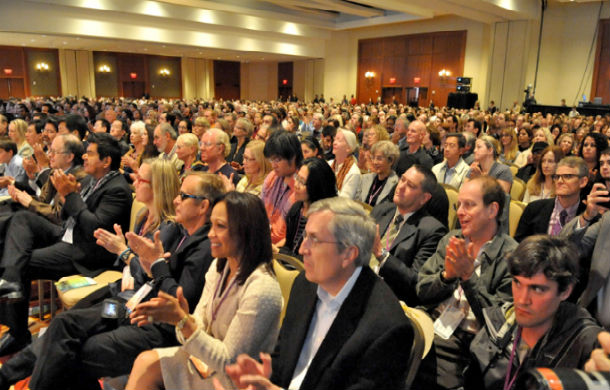 Dharamshala: - Continuing his six-state US tour, the spiritual leader of Tibet, His Holiness The Dalai Lama stopped in Middlebury, VT, on 13 Oct., to give a speech on finding common ground ethics for a whole world.

His Holiness was introduced by his old friend Senator Patrick Leahy. Leahy praised His Holiness not only for his determined promotion of non-violence but also for his unflinching pragmatism.

"Firstly, I want to say a few words to the respected Senator. I was 16 when I lost my freedom, 24 when I lost my country, so my life has been quite difficult and yet throughout that time the people on Capitol Hill have shown a consistent support for freedom, liberty, democracy and the rule of law. The United States is the greatest democratic country and the leader of the free world. There may be an economic crisis now, but we will eventually recover from it. You have great creativity - the US must succeed. I want to thank you for your long-standing and stalwart friendship," says the Dalai Lama.

When asked about whether he encouraged visits to Tibet, His Holiness replied that he always encourages any help in the fields of education and health care in Tibet. He also feels it is good for foreigners to visit Tibet to see the situation for themselves and to report back when they return. It is also good for Tibetans' morale to feel that they are not alone. In addition, he said it's important to make friends with Chinese students and business people and raise their awareness about Tibet. Once they understand the truth, their support for the Tibetan cause grows.

In seeking to create a happy world, His Holiness said, our approach must be realistic. "If it is unrealistic, it will not bear fruit. To understand reality, we have to look from different angles, from a distance as well as close up."

On 14 Oct., His Holiness was greeted on arrival in Boston, MA, by Sikyong Dr Lobsang Sangay and Ven. Tenzin Priyadarshi, Founder and Director, The Dalai Lama Center for Ethics and transformative values.

In a meeting with the Deans of Admission of several Universities and Schools in the greater Boston area, His Holiness was asked about his philosophy of education.
"Every sentient being, beings who have experience of pleasure or pain, has a desire to live a happy life.

Human beings have a brain that allows them to see that some emotions are destructive, while others are helpful," said His Holiness. The Dalai Lama noted that we tend to focus on appearances; however, there is often a gap between appearance and reality.
"Education's role is to help us bridge that gap and help us cultivate a more realistic approach to whatever we do," said His Holiness.

When asked why it is important that TIbetans become experts in various fields, His Holiness answered, "In order to be able to take responsibility for protecting Tibetan culture and the environment." His Holiness also mentioned that Tibet is referred to as the "Third Pole," because of its significance as the source of rivers that provide water for about one billion people across Asia. For this reason, Tibet's fragile natural environment needs preserving, as does Tibet's peaceful and compassionate culture. Education can further these goals.

Continuing his tour in Boston, His Holiness attended the Global Systems 2.0 Forum on 15 Oct, a day-long multidisciplinary forumas part of programs at The Dalai Lama Center for Ethics and Transformative Values at the Massachusetts Institute of Technology. The forum was dedicated to exploring ethics, economics and environment in the morning, and peace, governance and diminishing resources in the afternoon.

When discussing the topic of global warming, His Holiness remembered that while he was in Tibet, he had no idea about ecological issues. He only began to be aware of them when, having been accustomed to drinking from any water source in Tibet, he was cautioned in exile to be more careful. He said, "Climate change is not like other kinds of violence that have an immediate impact.

Environmental change is not sufficiently visible. Once it becomes obvious, it's often too late to do anything about it. This is serious. We have a responsibility to act because we have no option to move elsewhere. The moon, which looks so beautiful in the sky, and which is the object of so much poetic admiration, would actually be a horrible place to live. Our blue planet is the only home we have."

Continuing his tour, His Holiness will give a public talk on ‘A Global Challenge: Creating a Culture of Peace' at Brown University in Providence, Rhode Island on October 17, followed by public talks at the Western Connecticut State University in Danbury, Connecticut, on 18-19 Oct. on ‘The Art of Compassion' and ‘Advice for Daily Life.'

Concluding his tour in New York, the Dalai Lama will hold a one-day discussion on ‘Contemplative Practice and Health: Laboratory Findings and Real World Challenges' at the Rockefeller University on 20 Oct.

On 21 Oct., the Tibetan leader will attend the final public event of his tour at the Lincoln Center, on The Essence of Buddhism, at the request of the Tibetan and Kalmyk Communities.

For a full schedule of The Dalai Lama's talks and teachings, visit http://www.dalailama.com.