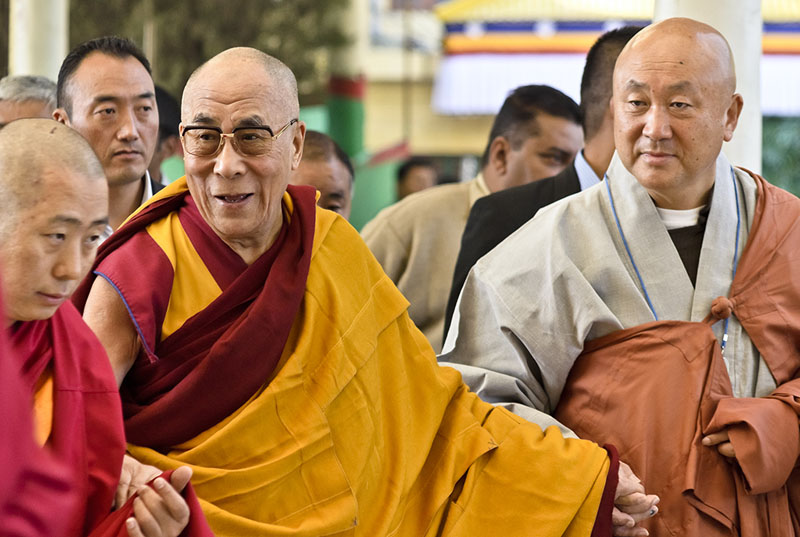 Dharamshala: Commencing the first of three days of teachings to a group of Korean disciples, His Holiness the Dalai Lama of Tibet introduced Chapter 24 of ‘Nagarjuna's Fundamental Treatise of the Middle Way’ on October 29th 2012 in the Main Temple, Dharamshala, India.
The Korean guests, which numbered almost 1000,were treated to clear skies upon their visit to the Tibetan exile community; nestled scenically in the foothills of the Himalayas. Warmly addressing the audience, which was filled with a mixture of Tibetans adorning colourful traditional garments (chubas), international tourists from 62 different countries, monks, nuns and almost 200 Indian guests, His Holiness the Dalai Lama opened by giving an insightful introduction into Buddhism itself.

The revered spiritual leader highlighted key topics such as the need to develop peace of mind within oneself, the importance of non-violent action, and highlighted the commonalities that we all share, stating:

“We must acknowledge the sameness of human beings”.

His Holiness also addressed key Buddhist teaching frameworks, such as the Four Noble Truths, adding that one must not take His teachings for granted, but to logically question and test what is taught with reason. He added:

“Texts need to be studied; not simply kept on an altar. Although we can use Buddhist texts as objects of veneration, we must examine the subject matter of Buddhism through reason and logic”.

An emphasis was also made by His Holiness for followers to not simply to avoid violent actions and negative emotions, but to actively develop and foster a positive, altruistic approach to life. He highlighted the nature of interdependency; the notion of Dependent Origination being unique to Buddhism as a religion, and the manner of cause and effect when studied carefully and critically.

An insight into the nature of attachment was also made by His Holiness, who conveyed:

“When you see a beautiful thing, you can become attached to it. When you see something ugly, aversion can occur. It is not only the subject, but you, who finds things the way they are. One creates attachment and aversion themselves”.

Additionally, He added that when you experience anger, it is not simply the object or the person creating the majority of the negative emotion; rather it is created within oneself. Drawing upon scientific research, His Holiness highlighted that 90% of the negative feeling towards the person or object is projected by the individual.

Amid generous helpings of Tibetan tea served by the resident monks, and amid a buoyant atmosphere, His Holiness drew the afternoon session to a close by introducing the text: Chapter 24 of Nagarjuna's Fundamental Treatise of the Middle Way. Nagarjunawho lived between 150 and 250 CE, was an important Buddhist philosopher and teacher, credited with founding the MadhyamakaSchool Buddhism and developing the ‘Two Truths’ doctrine.

His Holiness expressed His happiness to the Korean guests that He was able to teachNagarjuna's Fundamental Treatise of the Middle Way, adding that it was a treasure to have the text in the form of both its Korean Tibetan translations. Having thoroughly educated and enthralled the audience, His Holiness drew the teachings to a close at 3pm, ready for the following day.

The teachings on Nagarjuna's Fundamental Treatise of the Middle Way will continue on October 30th in the Main Temple, Dharamshala. A live webcast of the event is available from Tibetan to Korean, English, Chinese and Russian at: dalailama.com/liveweb.