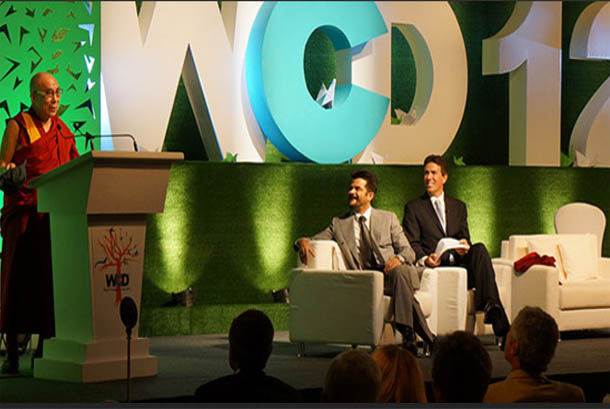 Dharamshala:- The spiritual leader of Tibet, His Holiness the Dalai Lama, has been continuing his visit to south India and meeting with various groups throughout the region.

On November 24, he spoke to a reporter from Doordarshan, the Indian national public service broadcaster, in Varkala, Kerala state. His Holiness expressed his admiration for India, saying, "I always say that India is a living example of the possibility of all religions living together in harmony - an example that others could learn from."

He also expressed hopes of working with China's new leader, Xi Jinping, and that his policies will include more compassion towards Tibet. His Holiness also expressed his sorrow over the continuing self-immolations in Tibet and urged China to consider why they occur.

The following day, His Holiness spoke at the inauguration of the 80th Sivagiri Annual Pilgrimage, honoring social reformer Sree Narayana Guru. In his speech, he detailed humankind's great advances, but also the struggles of the 20th century, suggesting peace and compassion as solutions to the problems of the current era.

His Holiness then traveled to Kochi, also in Kerala, to meet with Friends of Tibet (FoT). Medical services for Tibetans were discussed and His Holiness expressed gratitude to FoT for its extensive work in helping Tibetan people.

After the meeting, His Holiness spoke to India-vision News about his growing fears regarding the Tibet situation. He expressed gratitude to the international community for its support - particularly the Indian government. Later in the day, he spoke on the importance of harmony among religious groups, as he lit the inaugural light at the Malankara Orthodox Syrian Church's centenary celebrations.

On November 26, His Holiness traveled to India's 'garden city', Bangalore, in Karnataka state, to address students at Christ University. He polled how many under-30s were in the audience, stating that the future depends on their work. His Holiness challenged them to work individually on developing inner peace which could then be shared with others. He also addressed religion and science, agreeing with the Pope's belief that reason and faith must work in unison.

His Holiness traveled 70 km north of Bangalore on November 27 to Tumkur University, where he was presented with an Honorary Distinguished Professorship before inaugurating the International Conference on Yoga in Education. During his speech, he explained that the violence exerted in past global conflicts would destroy nations if used in today's interconnected world. Later that day, His Holiness traveled back to Bangalore to meet Tibetans living in exile there and expressed his pleasure that their Tibetan identities remained strong.

On November 29, His Holiness traveled to Mumbai to participate in World Compassion Day and launch India's Humane Society International, which supports animal welfare. He stressed the importance of compassion towards animals, given that they too feel pleasure and pain. He also urged others to follow vegetarian diets, noting that it is unjust to take away an animal's life.

His Holiness' will begin two weeks of teachings on November 30 at Gaden Monastery in Mundgod, Karnataka state, focusing on the 18 Great Stages of the Path Commentaries.

He will also give three days of teachings on Shantideva's A Guide to the Boddhisattva's Way of Life, near the Central University of Tibetan Studies in Sarnath, Uttar Pradesh state, beginning on January 7.