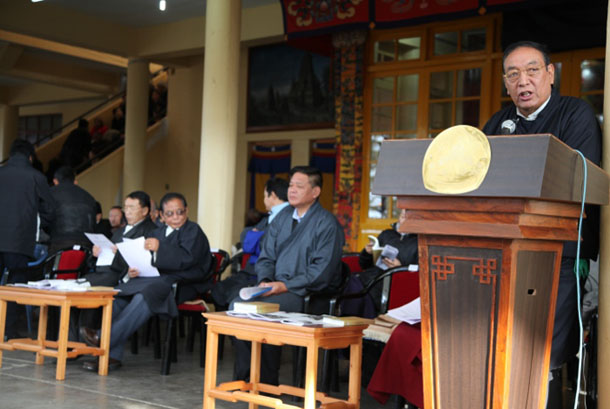 Dharamshala: - Political leader of the Central Tibetan Administration, Dr. Lobsang Sangay, gave a speech on December 10 to commemorate both the 23rd Anniversary of the awarding of the Nobel Peace Prize to His Holiness the Dalai Lama, and the 64th Anniversary of International Human Rights Day.

Dr. Sangay recalled that the Peace Price was awarded to His Holiness due to his advocacy of nonviolent, peaceful solutions founded upon tolerance and respect, and expressed his gratitude that Tibetans have been lead by such a revered man.

Sangay used the occasion to draw attention to the need for immediate concern and action in light of the over 95 Tibetan self-immolations occurring since 2009, 82 of which have occurred in 2012, with 28 in November alone. He pointed out that the phenomenon is no longer exclusively monastics but has spread to ordinary Tibetans.

He emphasized that this wave of protest brings into question a central claim of the Chinese government, that Tibetans living under their rule are content. Since the 1980's China has imposed martial law and expelled foreign journalist and tourists, making it difficult to validate or challenge this claim. Dr. Sangay pointed to the immolations as strong evidence to the contrary.

Further evidence includes the intense crackdowns on Tibetan gatherings between 2006 and 2008, creating great unrest as hundreds of Tibetans were beaten, tortured, and killed while protesting hardline Chinese policies and the Beijing Olympics in 2008.

Dr. Sangay remarked that Chinese authorities have blamed the immolations on the influence of Tibetan leaders, only undermining themselves as they show that they have utterly failed to attain any loyalty despite over 50 years of occupation.

Further, Dr.Sangay dispelled the idea that self-immolations are the only form of Tibetan protest. He drew attention to Tibetan students who have gathered in the thousands to demand equality and protection of Tibetan language, protests against Chinese destruction of the environment through mining and damming, and the three day hunger strike beginning on November 26 which involved teachers, government officials, monks, and business people alike. He also highlighted the Lhakar movement in which Tibetans pledge to speak, wear, eat and accentuate everything Tibetan on Wednesdays.

His emphasis was that the self-immolations represent a new phase in Tibetan protest, provoked by increasingly harsh Chinese policies and increasing despair. Dr. Sangay described the immolations as a vicious cycle of "unrest, repression, and more unrest". The Khashang(cabinet) attributed the rapidly increasing number to "religious repression, economic marginalization, social discrimination, cultural assimilation and environmental destruction".

Dr. Sangay moved on to remind the audience that it is the responsibility of those fortunate enough to live in free countries to do everything possible to make a reality the wishes of Tibetans still living in Tibet, which have repeatedly been the return of His Holiness and freedom for Tibetans.

Dr. Sangay expressed gratitude for the positive developments occurring over the past year, including statements of support from governments across the globe, specifically the UN High Commissioner on Human Rights, Navi Pillay, the US ambassador to China, Gary Locke, the Human Rights Commissioner of Germany, and the French Senate.

In keeping with the CTA's Middle Way Approach, he encouraged world governments to engage with China in a human rights dialogues and assured the audience that the CTA will likewise continue to pursue meaningful dialogue. However he asserted that the responsibility for the crisis in Tibet, and its resolution, ultimately lie with the Chinese themselves. He emphasized that the Tibetan campaign is not anti-Chinese, but pro-freedom, and asked for Chinese people to stand in solidarity with this justified stuggle.

Dr.Sangay called on leaders and citizens to organize rallies and vigils in capital cities worldwide, and to lobby for and draw attention to what Time magazine has called the most under-reported story of 2011.

He declared May 17 as a day of Solidarity for Tibet in commemoration of the day in 1995 when then six-year-old Gendhun Choeky Nyima, recognized by His Holiness the Dalai Lama as the 11th Panchen Lama, became a political prisoner.

Finally he announced that Kashag and the Tibetan Parliament-in-Exile will be jointly implementing a four-day program of rallies, presentations and solidarity activities from January 30 to February 2, 2013 in New Delhi.

In closing he expressed his gratitude to the people and government of India for their continued hospitality, and to friends of Tibet around the world for their efforts. He reminded the audience that their support is needed now more then ever.

Directing his words to Tibetans living in occupied lands, Dr. Sangay asserted that "we are with you every step of the way" and that "unity, innovation and self-reliance" will bring their demands to fruition.