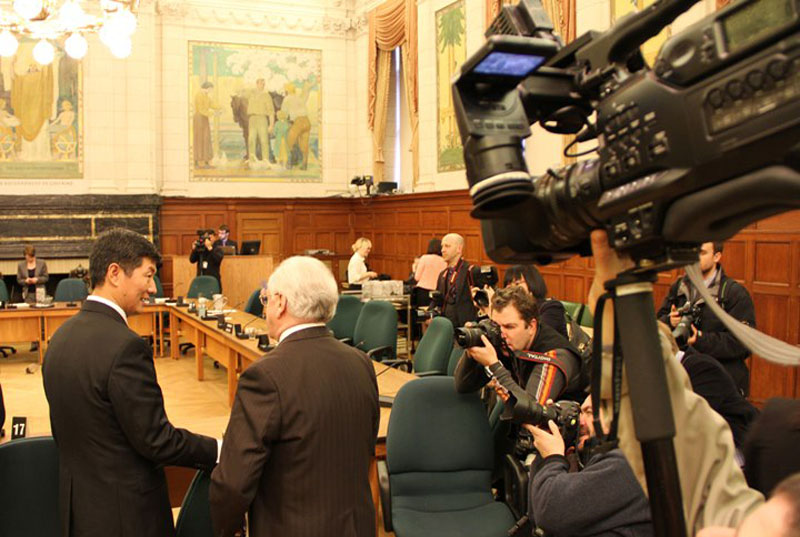 Dharamsala: Lobsang Sangay, the political leader of Tibet yesterday (26th of February, 2013), spoke to the Canadian Parliament on the ongoing human rights crisis in Tibet, imploring them to stand by Tibet's side as the self immolations continue to gather momentum. In reality, the blame and solution lies within Chinese government, he told the Canadian committee. 'The causes of self-immolation protest are occupation of Tibet and repression of Tibetans.'

The speech, in Ottawa, Canada, was to the Sub-Committee on International Human Rights. The political leader of Tibet began his statement by thanking those who had extended their help to Tibet over the years.

Dr Lobsang Sangay went on to praise the Canadian government for allowing the migration of many Tibetans in the country since announcement by Canadian minister Jason Kenney in December 2010. At the time of that announcement Mr Kenney said,
"Our government's openness to Tibetan refugees is in keeping with Canada's best humanitarian traditions" .

"We look forward to working with the Government of India and the Tibetan-Canadian community on the implementation of this program, and on welcoming these individuals to Canada"
,he added.

The second aspiration is to have freedom for Tibetans. We fully recognise and appreciate democracy, freedom and rule of law, which are three core principles of Canada enshrined in the Canadian constitution also. That freedom, which the Canadians enjoy, is the aspirations of Tibetans inside Tibet. As reflected in the slogans of the self-immolators, as far as Tibetan Buddhism is concerned 108 is an auspicious number, but unfortunately if there is one more self-immolation it will be an very inauspicious in the history of Tibet. This phenomenon of self-immolation is a new one as well as a tragic and sad one. Hence, the Tibetan administration and I have made repeated calls to Tibetans inside Tibet not to resort to self-immolation. We have categorically discouraged drastic actions including self-immolation, because as a human being we do not want see any one die the way Tibetans are doing inside Tibet. And as Buddhist or person of faith, we pray for all those who have died, including the self-immolators. And as a Tibetan, we support the aspiration of the Tibetan people inside Tibet including the self-immolators. So, I, on their behalf is in this August body to highlight and share with you the sufferings of the Tibetan people, and share with the aspirations of the Tibetan people so that your committee and through your committee the Canadian Parliament who have stood with us will for all these years continue to stand with us."

He continued by added China's stance on the issue, "Unfortunately, the Chinese government instead of finding solution, is resorting to blame game and they are blaming us the instigator. If you look at the blames that they have levelled against us, first they say the self-immolators are crazy and they have lost their mind. When this did not work, they started saying these are the jobless, hopeless people who are resorting to self-immolation. Then when self-immolation escalated they said these are instigated from outside, by us. There is not even a shred of evidence as far as these allegations are concerned and we have welcomed the Chinese government to come to Dharamsala to see our files and look for evidence if there is any. We can categorically say that the allegations made by the Chinese government are baseless. And they are welcome to come to Dharamsala and find out if there is any evidence. In reality, the blame and solution lies with Beijing. The cause of self-immolation are occupation of Tibet and repression of Tibetans. Tibetans are saying occupation is unacceptable and repression is unbearable. Hence there is political repression, economic marginalisation, environmental destruction, cultural assimilation, and denial of religious freedom. These are the reasons why Tibetans are forced to resort to self-immolation. There is no space for any kind of protest and there is no freedom of speech for Tibetans. Hence tragically and sadly, they are resorting to self-immolation."

While the main subject of Lobsang Sangay's testimony was that of violence in Tibet and that of migration out of Tibetan areas he was firm in his stance for the Tibetan movement going forward into the future, "having said all that, we do believe, as I stated in the beginning of my statement, that we have to find the solution through peaceful means. Tibetans have subscribed to non-violence and democracy for these many decades. We will continue to subscribe and believe in these principles. So we seek the support from friends like you who believe in freedom, who believe in democracy, that the Chinese government ought to enter into dialogue to solve the issue of Tibet peacefully."

He concluded by once again thanking the Canadian government for their support in their long history of supporting Tibetans and urged them to continue with their vast support especially during this difficult part of Tibetan history.