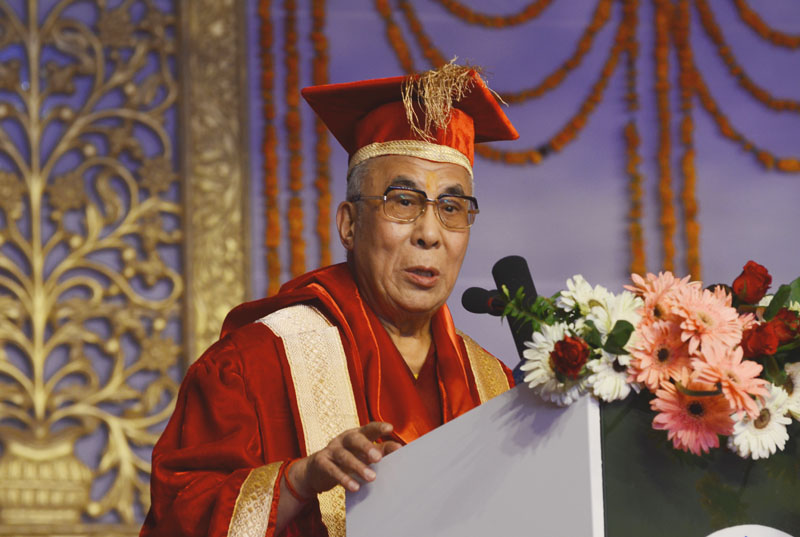 Dharamshala, Thursday, Feb. 7: - The Central University of Himachal Pradesh (CUHP) conferred the honorary degree of Doctor of Philosophy (DPhil honoris causa) on the spiritual leader of Tibet His Holiness the Dalai Lama on its first convocation ceremony held at Temporary Academic Block (TAB), Shahpur on Thursday, about 8-km from Dharamshala.

Member of Planning Commission and Chancellor of CUHP, Arun Maira, presented the degree to the Nobel peace laureate, His Holiness the Dalai Lama, who was also the chief guest on the occasion. The Tibetan Chief Justice Commissioners, Deputy Speaker of Tibetan Parliament in exile Ven Khenpo Sonam Tenphel, and Finance Kalon Mr Tsering Dhondup, were among the dignitaries who attended the ceremony.

Addressing the crowd, His Holiness the Dalai Lama spoke of happiness and well-being. "I believe that the very purpose of life is to be happy. From the very core of our being, we desire contentment. My own limited experience I have found that the more we care for the happiness of others, the greater is our own sense of well-being, His Holiness stated in his convocation message.

"Cultivating a close, warmhearted feeling for others, however different from us they may seem to be, automatically put the mind at ease. It helps remove whatever fears or insecurities we may have and gives us the strength to cope with obstacles we encounter. It is principal source of success in life. Since we are not solely material creatures, it is a mistake to place all our hopes for happiness on external development alone. The key is to develop inner peace," His Holiness added.

The Nobel peace laureate said that fundamentally, human beings are all the same as they want happiness and do not want suffering, despite the differences in their colour of skin or texture of their hair, in their religious beliefs, in the languages they speak, culture they uphold or even differences of gender. "Basically the same human beings. Appreciating this sameness is crucial to respecting and understanding other people and to developing compassion and kindness toward them," His Holiness further added.

His Holiness said, the short-sighted way, which pursue our own vested interests and seek to fulfill our needs cause conflicts. "If we focus only on our own requirements, regardless of the needs and interest of others, we are likely to hurt them and provoke their hostility. This is especially true when we view happiness predominantly in terms of material possessions, wealth and power. Although, to my mind, this viewpoint is mistaken, it is widespread. Moreover, while many people driven by greed, others act mainly out of fear of losing that possessions, wealth and power they already have." 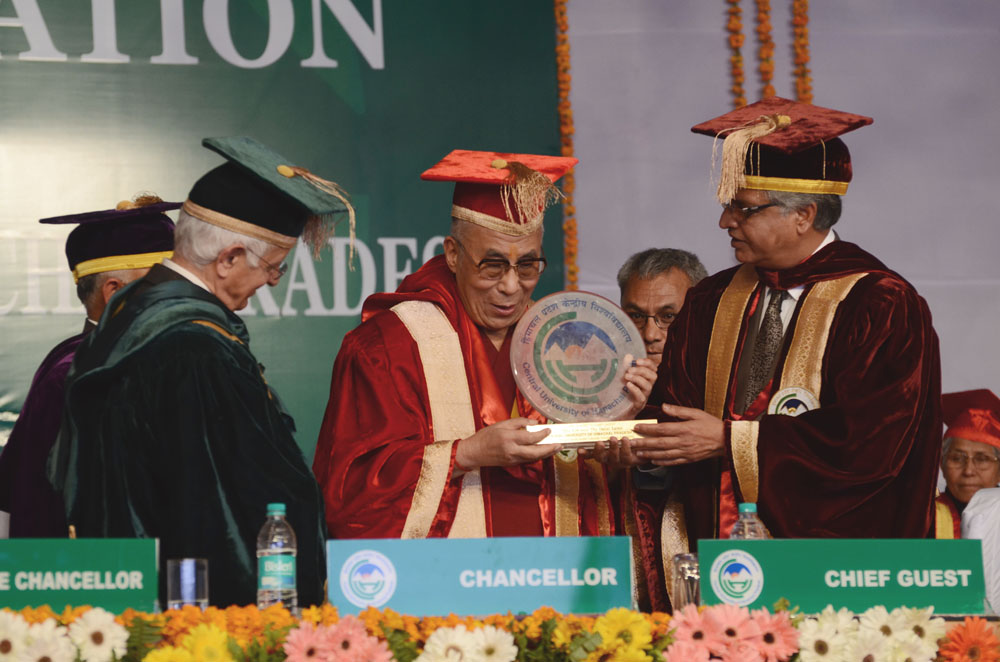 "Wars are fought, people are killed or driven from their homes and entire communities are destroyed, because of human greed and fear. All over the world, people no different, from us, see their lives ruined by someone else, desire to gain or fear of losing territory, economy resources and cultural and political supremacy, not to mention naked ideological and religious self-righteousness. This is not something that only happens elsewhere, for it is often governments that we have elected, and corporations, whose products and services we buy, or whose shares we own, that cause suffering while pursuing their narrow interests. Sooner and later, the victims of such short-sightedness attempt to defend themselves and assert their right to happiness: tension and conflict result."

"Clearly, mainly of the world's problems and conflicts arise because we have lost sight of the basic humanity that blinds us all together as a human family. We forget that despite the diversity of race, religion, ideology and so forth, people are equal in their basic wish for peace and happiness. However, such goals will not be achieved by merely talking or thinking about them, nor by waiting for someone else to do something about them. We each have to take responsibility as best we can within our own sphere of activity. As free human beings we can use our unique intelligence to try to understand our world and ourselves. But if we fail to use our creative potential, we will forego one the basic characteristic of human being," His Holiness stated.

"As our world becomes smaller and communication becomes faster, we are all much more interdependent. Therefore, it is essential that we look to the future, not only with an international perspective and respectful appreciation of other people, their cultures and environments, but also with a broad and long-sighted outlook."

His Holiness called upon the students to preserve India's ancient treasure of knowledge and combine it with modern education for a better future. "Though modern education is essential for development, you should also treasure your traditional knowledge which is thousands of years old," the Dalai Lama said adding that modern education is oriented towards materialistic values and could only provide physical comfort instead of mental peace.

"Maintaining that everyone on earth wants to lead a happy and sensible life. There was a big difference in appearance and reality and the very purpose of education was to reduce ignorance and lead us towards reality. "I do pray and do analytical meditation everyday but I think the affect must come from action not just from desire," His Holiness said.

Addressing students who were awarded degrees, the spiritual leader of Tibet said that they have reached a crucial level in their life and that it was now time to face the real world. "Life is not easy and it depends on yourself how you want to live it. Things will be more complicated now onwards and you will have to prepare yourself. If you take things for granted there will be a lot of disturbance in life," the spiritual leader said.

Giving an example, His Holiness said that the concept of quantum physics, which the western world came to know in the last century had been described in the text of Nagarjuna which is almost two thousand years old. He said Buddhism was introduced in Tibet by great masters from Nalanda University of India in the 8th and 9th century. "India has a long and rich ethical traditions exemplified by self-sacrifice and non-violence. But, it is not enough to talk admiringly about these qualities; we must incorporate them into our daily lives. We must apply them to our relations within our own families and communities. If we look forward to great peace, justice and honesty in society, we must start by applying these values ourselves," His Holiness added.