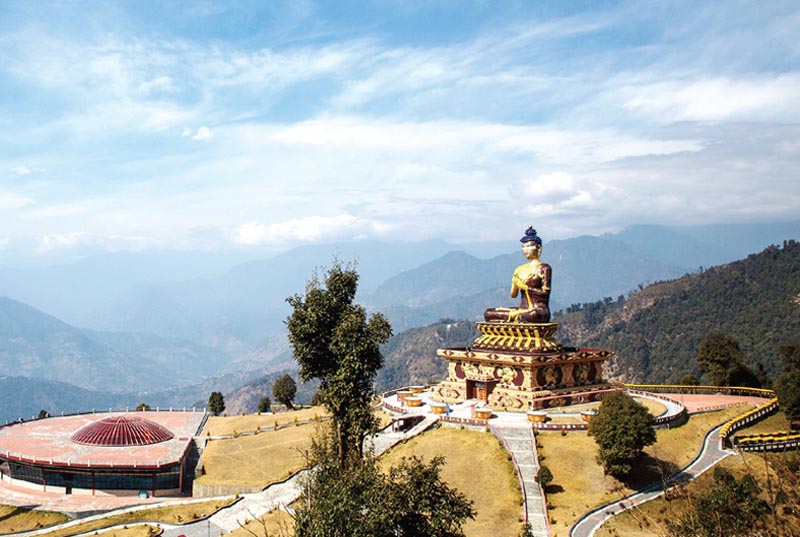 Dharamshala: - The spiritual leader of Tibet His Holiness the Dalai Lama will be visiting Sikkim state for the consecration ceremony of Tathagata Tsal and Buddhist teachings at Rabong in south of the state during the last week of this March.

Sikkim State officials said the Nobel Peace Prize laureate will be reaching Rabong from Delhi via Bagdogra on March 24, as part of his three-day tour. "The Chief Secretary of Sikkim, Rinchen Ongmu visited Rabong on the 16th March 2013 to take stock of the preparedness for the visit of His Holiness the Dalai Lama who is scheduled to consecrate the Statue of Lord Buddha on 26th March 2013."

The ceremony will take place on March 26 morning, after which the monk will reach Gangtok to interact with students and youths in the Mannan Kendra, Gangtok on the same afternoon. Officials also said around 30,000 devotees are expected to attend the consecration ceremony.

His Holiness will lead a Vajrakilaya consecration prayer for a new Buddha statue followed immediately by the official inauguration ceremony of the statue. In the afternoon he will give a teaching on Gyalsey Thokme Sangpo's Thirty-Seven Practices of a Bodhisattva (gyalsey laklen sodunma), according to office of His Holiness the Dalai Lama in Dharamshala.

A group from the Tibetan Institute of Performance Arts from Dharamshala is also coming to perform cultural items along with the troop of the state's culture department during the ceremony.

The Information Technology Department will be web casting the entire event live through www.tathagatatsal.com.

"The Hon'ble Chief Minister Shri Pawan Chamling unveiled the name of the Park which has been given by His Holiness the Dalai Lama," according to the officials.

His Holiness will also visit in Salugara, West Bengal State from March 27 to 29. He will give teachings on Tsongkhapa's Concise Stages for the Path to Enlightenment (lamrim dudon) and Gyalwa Longchen Rabjang's Relaxing the Mind Itself (semnyid nyalso). On the morning of March 29 he will confer an Avalokiteshvera Initiation (chenresig wangchen).