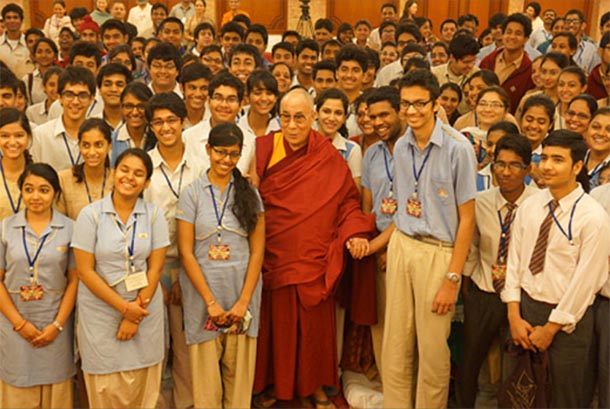 Dharamshala: Addressing an audience of Indian students in Delhi, His Holiness the Dalai Lama of Tibet urged for the opportunity to create a more peaceful world for younger generations, stating:

"The potential for conflict remains, but despite our different views and interests it should be possible to maintain peace through dialogue rather than resorting to the use of force."

For the generations growing up in the 21st century, His Holiness stressed the need to respect others, and to create a more peaceful world. He warned against the potential of greater conflict and scarce resources on the planet during their lifetimes, and re-iterated the need to approach such issues in a non-violent way. He added that Tibetans consider themselves disciples of India through Buddhism, and confided:

"I often describe myself as a Son of India because my brain is full of Indian thought, and my body has been sustained these last 50 years and more by Indian rice, dal and roti."

The spiritual leader of Tibet also stated the need for ethical values with a secular basis, adding that whether we are happy or not depends on our attitude, 'compassion, for instance, leads to a calmer mind. Placing all our hope on material development is clearly mistaken; the ultimate source of happiness is within us'.

Highlighting the multitude of religious faiths and beliefs in India, His Holiness stated:

"You too have a responsibility to think of humanity's welfare and those of you who are believers have a responsibility to build an understanding with people of other faiths...Here in India, the concepts of secularism and secular ethics have evolved and from this springs ahimsa, the sense of doing others no harm. Such ancient values are very relevant in today's world".

His Holiness the Dalai Lama drew upon the text; Atisha's "Lamp for the Path to Enlightenment", and responded to questions with quotes and prayers, including that of Shantideva, for which He stated it gave Him purpose in life, and is a source of satisfaction, determination and inner strength.