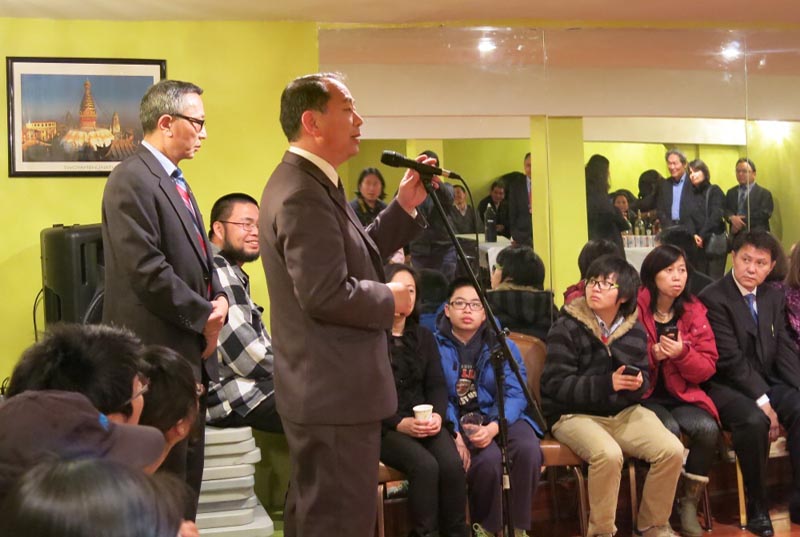 Dharamshala: A dinner reception held by the Office of Tibet in New York on March 22 was attended by nearly sixty Chinese residents.

The evening took place at Norling Tibetan Restaurant in Jackson Heights and was part of an ongoing process to reach out to the Chinese people.

His Holiness the Dalai Lama's Representative for America's Lobsang Nyandak addressed the gathering and explained them of the importance of mutual understanding between the Tibetans and the Chinese particularly in the face of crisis unfolding inside Tibet.

The gathering was attended by Chinese residents on New York including dissidents, activists, bloggers, students and scholars. Those who attended included: pro-democracy activist and journalist Hu Ping, who is currently the editor of the influential New York-based Beijing Spring magazine, Jing Zhang, executive director of Women's Rights in China and Prof. Peter Kwong, Hunter College professor who organised His Holiness the Dalai Lama's two visits to the Manhattan-based college.

Many influential Tibetans were also present, Rinchen Dharlo, president of the Tibet Fund, representatives from the Tibetan Youth Congress (TYC), Tibetan Women's Association (TWA), and staff of the Office of Tibet, NY, attended the gathering.

"It is a very good to have the Chinese and Tibetans to have the opportunity to meet," said Kwong. "At this point, most Chinese, even including the educated Chinese people do not know much about the Tibetan issue. So it is very important to provide such opportunities for the two sides to meet."