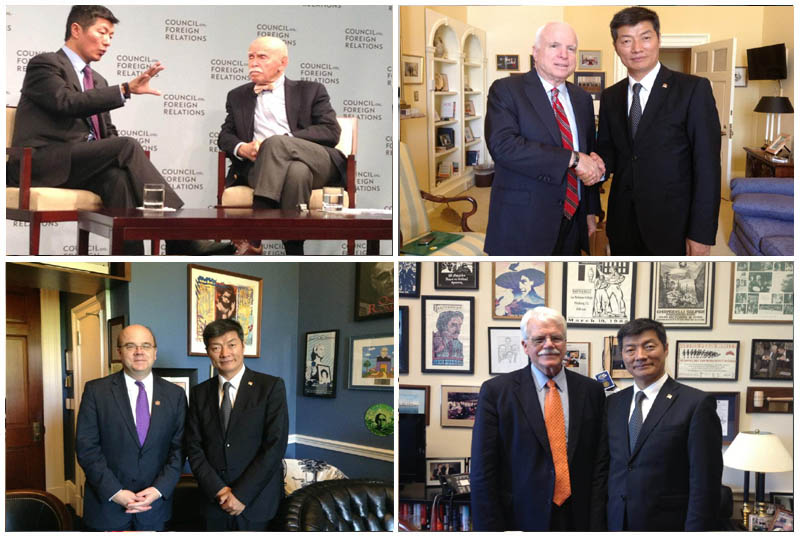 Dharamshala: - Sikyong Dr Lobsang Sangay, the political leader of Tibet, concluded his third official visit to the United States of America on May 10, 2013.

The Sikyong who was in Washington from May 06-10 met with senior Republican leader John McCain, who reassured Dr Sangay of his support for the Tibetan cause and Senator Ben Cardin, the Chairman of the East Asian and Pacific Affairs Subcommittee, discussing a wide range of issues, related to Tibet.

Earlier, he had met with Nancy Pelosi, the leader of the US House of Representatives, Congressmen Jim McGovern, George Miller, while also attending a lunch meeting with 35 Congressional staffers.

Dr Sangay participated in "A Conversation with Sikyong Lobsang Sangay", organised by The Council on Foreign Relations (CFR) and hosted by Professor Jerome Cohen. He spoke on his role as the political leader of the Tibetan people, the devolution of power from His Holiness the Dalai Lama and the current crises engulfing Tibet.

The Tibetan political leader spoke of the importance that Tibetans attribute to "non violence", stating a readiness "to engage in dialogue with the Chinese government anytime, anywhere, to solve the issue of Tibet".

When asked whether he thought that democracy could be instituted in a genuinely autonomous Tibet, Dr Sangay replied that what was required were "rights as per the provisions of the Chinese constitution". He added the "democracy is what we practice and what we aspire".

The Sikyong also met with representatives of various prominent Human Rights organizations in the office of the International Campaign for Tibet, including those of Amnesty International, Reporters without Borders and Human Rights Watch.

He also met with over a hundred Tibetans on May 09, informing them of the latest developments regarding the workings of the Kashag and the results of his latest visit to the United States.