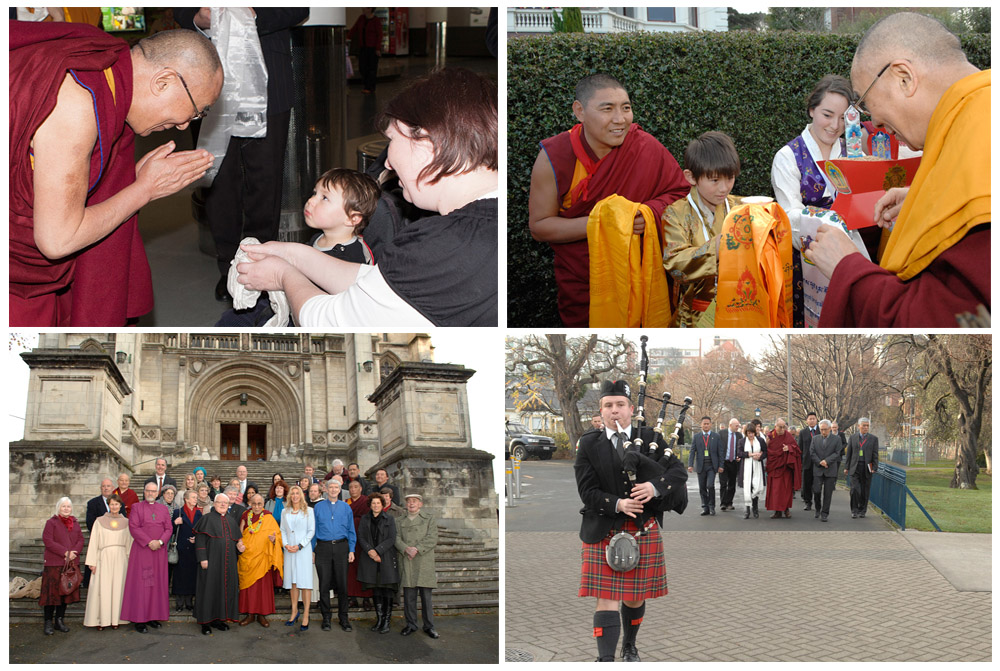 Dharamshala: - As part of his four-day visit to New Zealand, His Holiness the Dalai Lama of Tibet attended numerous events in Christchurch and Dunedin on June 10 and June 11. His Holiness spoke with students in both cities, and also met with parliamentarians and gave a public talk focused on ethics for a whole world.

On June 10, His Holiness began his second day in Christchurch with a meeting with the New Zealand Youth Representatives of the Council for a Parliament of World Religions. While he gave his support for their work, His Holiness stressed that attaining inter-religious harmony requires us to be active.

"Religion is about cultivating a more peaceful mind, so it's very disappointing if religion becomes a source of conflict," His Holiness told the group.

His Holiness next spoke to 12 parliamentarians from different parties, reflecting the diverse 120-person Parliament. The topic of discussion quickly centered on Tibet's relationship with China. His Holiness spoke out against censorship and explained that the judicial system must be raised to international standards.

Reflecting on the presence of force in Chinese history, His Holiness reminded the parliamentarians that force leads to fear and that harmony must be based on trust and come from the heart. His Holiness stated that Tibet is not demanding independence.

"It is to Tibet's advantage to remain with the People's Republic of China, so long as we have genuine autonomy, the ability to maintain our culture, language and identity, which the Chinese constitution provides for," His Holiness said.

His Holiness shared that the absence of wholehearted Chinese support of Tibet lies in the fact that China does not understand the Middle Way approach. He also mentioned the ironic statistic that China has the largest Buddhist population in the world with over 400 million disciples.
His Holiness appealed to New Zealand, a small and neutral nation, to encourage China on the path of democracy.

Realistically, His Holiness expects gradual change, as China has no experience with democracy and continues to deny many citizens constitutional rights. He pointed out that most recent self-immolations have occurred in areas under direct Chinese administration. 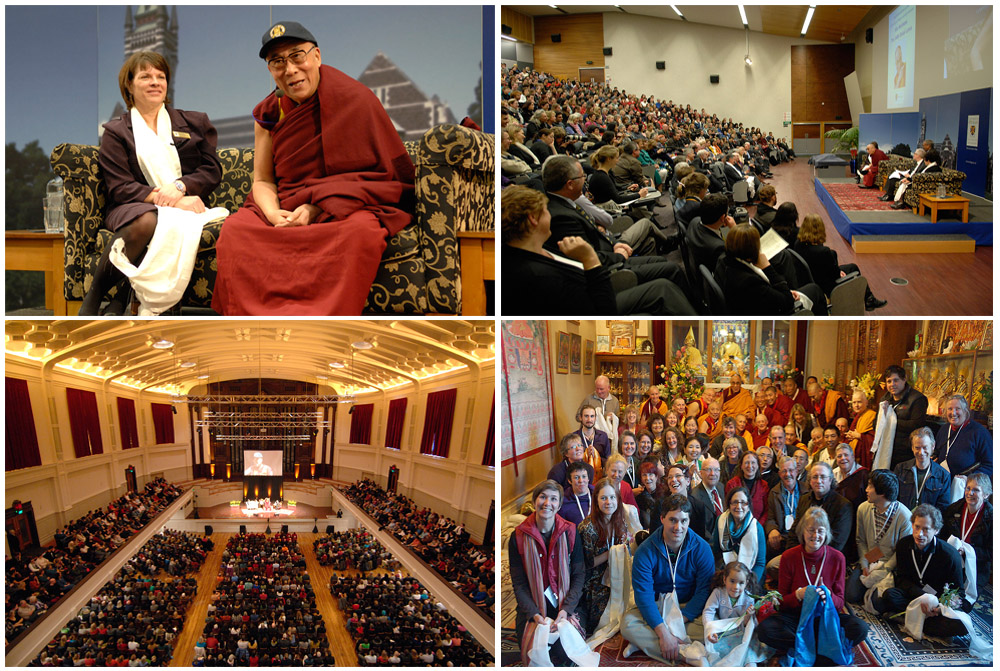 A team of Maori sportsmen greeted his Holiness with a traditional welcome at an event later in the day organized by the University of Canterbury Student Association.

"We may have different language and culture, but physically, mentally and emotionally we are all the same," His Holiness said to the gathered students. "Great developments in science and technology, whose purpose is to ensure a happier humanity, have sometimes brought more stress and anxiety."

His Holiness explained that the ultimate source of joy and peace of mind is within the mind. Even though short-lived satisfactions are pleasant, long-term meditation is more beneficial. As they say, money can't buy happiness.

"We have an opportunity to make this century a more peaceful, happier era," His Holiness told the students. He placed the responsibility for this transformation on the younger generation. His Holiness proceeded to answer questions about climate change, population control, and civilization clashes.

"I use my own intelligence, on the basis of a calm mind, and employ what I have learned from ancient Indian thought," His Holiness said when asked who he looked to for guidance.

His Holiness concluded his visit in Christchurch with comments on the necessity of secular ethics, the importance of leading a meaningful life by helping others, the absence of an absolute truth, and his contradictory non-vegetarian diet.

Upon arriving in Dunedin in the afternoon, His Holiness was welcomed at the Dhargyey Buddhist Centre. He spoke about his time in exile, and expressed pride at the Tibetan preservation of knowledge and culture. Ven Lhagon Rinpoche presented a report of the accomplishments of the centre, to which His Holiness responded with praise and suggestions for increased study of Buddhist science and philosophy.

More than 30 local church leaders and representatives of the Dunedin Interfaith Council greeted His Holiness on the steps of St. Paul's Cathedral the next morning. The welcome was followed by a discussion on Maori beliefs at the University of Otago Clocktower Building.

A bagpiper led the way to the University's St David Lecture Theatre, where Vice-Chancellor Prof Harlene Hayne made introductory remarks and then opened the floor for questions from the 550 students and staff members.

His Holiness spoke on the lack of a Buddhist view on creation, which is instead substituted by a belief in the continuing cycle of the beginningless universe.

Speaking of a monk whose body remained fresh for 17 days after his clinical death, His Holiness asserted that there exists a subtler level of consciousness that is able to function when sensory consciousness can no longer.

In true fashion of investigating and testing what is taught, His Holiness has introduced science to the curriculums studied in Tibetan monasteries. His Holiness has also established the Mind & Life Institute.

When asked about death, His Holiness advised the visualization of death, because a lack of preparation will lead to an unpleasant surprise when ultimately faced with death.

"Tibetan Buddhist culture is a culture of peace, compassion and non-violence and as such is of great value to the world," His Holiness said on the state of Tibet and the decision not to seek outright independence.

"I am convinced of the importance of acknowledging the oneness of humanity, so try not to think only of New Zealand, but think instead of the whole world," His Holiness concluded his meeting with the students.

His Holiness' last appearance of the day took place in front of an audience of 2,100 for "Ethics for a Whole World" at the Town Hall. His Holiness stressed the importance of ethics as a source of peace and trust.

"Personally we need faith in our own tradition, but at the same time we need to cultivate understanding and respect for others," His Holiness advised. He followed up by saying that this sense of compassion does not stem from religion, but from our mothers.

His Holiness also spoke on the importance of enemies, because they allow us to practice our patience and forgiveness.

His Holiness gave a brief televised and webcast interview to Rev. Professor Sir Lloyd Geering back at Otago University, before preparing to fly to Auckland early on June 12 for a series of meetings and a speech on "The Path to Happiness."