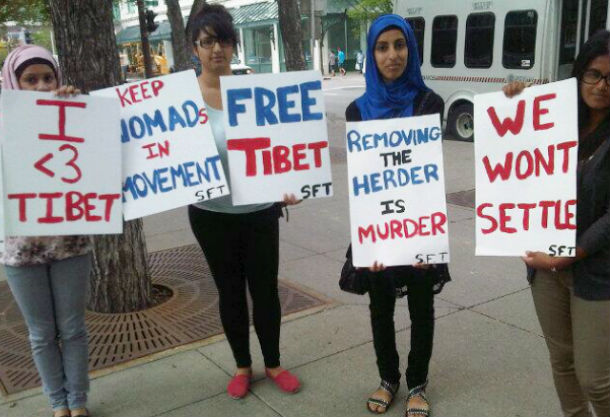 Calgary: - Students for a Free Tibet (SFT-Canada) Wednesday, July 24, led a protest against the forced resettlement of nomads in Tibet. In front of City Hall in Calgary, supporters signed petitions that urged the Chinese government to halt its destructive policy of forcibly relocating Tibetan nomads and herders.

According to a recent report from 'Human Rights Watch', since 2006 over two million Tibetans have been relocated in Tibetan areas. Tibetans worldwide strongly criticized the mass resettlement policy by protesting in front of local representatives' offices.

"The nomads of Tibet have a basic human right, and that is the right to their own way of life." said Tonie Minhas, Regional Coordinator with SFT Canada. "Nexen, a Canada-based oil company that was recently sold to a Chinese state-owned firm, is now complicit in funding the forced resettlement of Tibetan nomads. As Canadians, we cannot fund the destruction of another indigenous group and their way of life. 2 million is enough, and we need to stop this now."

Following the protest, Students for a Free Tibet members handed a report on the forced relocation of Tibetan nomads to the Chairman of the Board of Directors at Nexen. Nexen was recently bought by China National Offshore Oil Corporation (CNOOC), a Chinese state-owned oil firm.

CNOOC reportedly dedicates a large part of its social aid funds towards nomadic resettlement in Tibet, a policy of forced displacement many rights groups claim further exacerbates the repressive conditions in Chinese-occupied Tibet.

Nomadic land, seized under false claims of ‘environmental protection’ in the age of climate change, is cleared largely to make way for dams and mining operations.

For thousands of years, Tibetan nomads lived sustainably on the grasslands; now China’s policy of ‘converting pastures to grasslands’ is leading to overgrazing in fenced-in areas and exacerbating desertification.