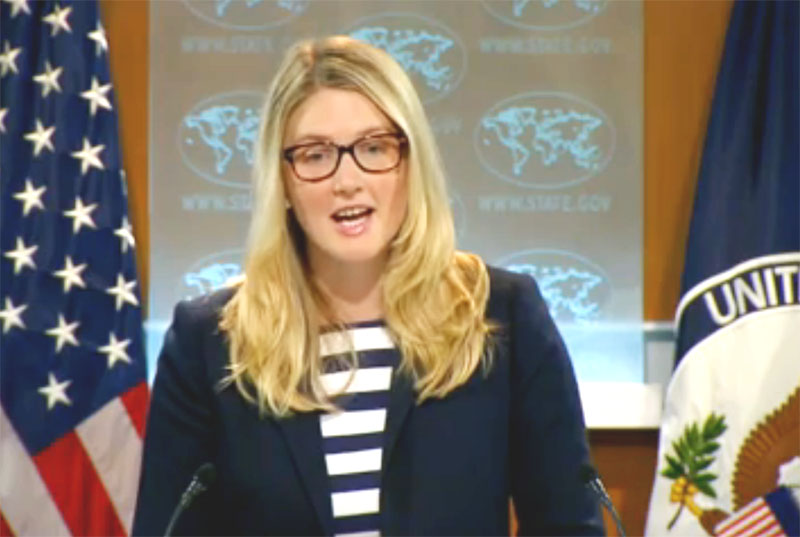 Dharamshala: - U.S. Government said the 18th annual Human Rights Dialogue between US and China held in-depth and frank discussions on human rights issues at the highest levels. It was concluded on July 31, in Kunmíng is the capital and largest city of Yunnan province in Southwest China.

"The two sides held in-depth and frank discussions on the rule of law, freedom of religion, freedom of expression, freedom of association, and other human rights issues, including specific cases of concern at the highest levels," U.S. State Department spokesperson Marie Harf said.

During the daily press briefing on August 1, Marie Harf however, did not mention Human Rights situation inside Tibet, where Tibetans being violently suppressed, but she said "specific cases" which related Human Rights issues were raised by the U.S. side.

MS. HAR said that "the Human Rights Dialogue is an opportunity to reinforce the messages, including on specific cases that we consistently deliver at the highest levels on these issues."

"But we've made clear from this podium and elsewhere when we have concerns about specific cases and will continue to do so," she added.

"I don't have a further readout on that. Clearly, we believe that this is a continuous conversation. It's important to continue having it, because obviously human rights is a key tenet of U.S. foreign policy, MS. HARF told them after she was asked whether she did sense that the Chinese side committed to anything.

The dialogue is "taking place against the backdrop of alarming escalation in self-immolations by Tibetans to protest against the Chinese government's repressive rule," said the Dharamshala based Central Tibetan Administration just a few days before the U.S.- China meeting.

Throughout the Dialogue, I made the same point that Vice President Biden made at the S&ED – that “China will be stronger and more stable and more innovative if it represents and respects international human rights norms.” Uzra Zeya acting Assistant Secretary of State said on August 2, 2013 during the Press Conference on U.S.-China Human Rights.

"As we have done many times in the past, we recognized the Chinese people’s remarkable record of economic development over the last three decades," she added.

"At the same time, we did not shy away from raising the full range of issues where China’s policies and human rights practices have fallen seriously short of international standards," she added.

"We also underscored U.S. concern over China’s severe restrictions on religious freedom and the freedoms of expression, assembly and association, both offline and online," said Zeya.

"We also expressed deep concern about China’s stepped-up attempts to silence dissent and tighten controls over Tibetans and Uighurs, emphasizing that policies ostensibly designed to maintain stability are counterproductive when they deny Chinese citizens their universal human rights and fundamental freedoms," she said.

"We also urged the Chinese government to engage in substantive dialogue with the Dalai Lama or his representatives, without preconditions," Zeya further addd.

She reiterated that dialogue is "a chance for the two countries to engage on human rights issues and to do so in a more in-depth manner, focusing both on specific issues and specific cases, and to lay out opportunities to take action to improve human rights conditions in China and China’s reputation in the world."

"In addition, we specifically called into question the pattern of arrests and extralegal detentions of public interest lawyers, Internet activists, journalists, religious leaders, and others who challenge official policies and actions in China."

"We noted that such actions are contrary to China’s international obligations and indeed, in most cases, China’s own laws and constitution.  We also conveyed our deep concern about attempts to control or silence activists by targeting family members and associates of those activists, an issue that the Secretary has raised with his counterparts."

Since 2009, at least 120 Tibetans have set themselves ablaze in Tibet to protest against Chinese rule, calling for the return of His Holiness the Dalai Lama to Tibet and freedom for Tibetans.

China still today continues its brutal crackdowns in Tibet with using its iron fist policy to control the Himalayan religion. The regime also inculcates on its citizenry that the Tibetans are one of her minorities, are backwards and superstitious and tells stories of how much China does to help the "poor" Tibetans and how happy Tibetans are for their help.

Tibetans hover say over 1.2 million Tibetans have lost their lives and thousands of monasteries and temples were destroyed directly as result of China's brutal occupation. Tibetans continue to live without basic human rights today under the rule of China.