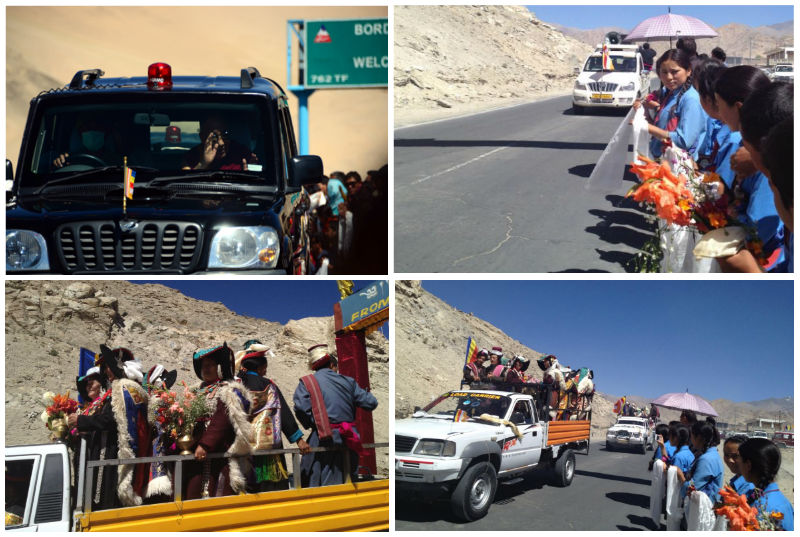 Leh, Ladakh: - The sun was beating down and the heat was on. However, nothing could have stopped the droves of Ladakhis from coming out on the morning of July 29th for a possible glimpse of His Holiness the Dalai Lama and to give Him the warmest of welcomes to the "top of the world," as he proceeded from the airport to his place of retreat, following his arrival in Leh, Ladakh.

Ladakh, a spectacular, yet arid region, high in the Himalayas, has earned both the titles, "Top of the World," and "Little Tibet" in India and has been noted to be one of the last undisturbed Mahayana Buddhist societies on Earth.

Yet on this day, Buddhists and non-Buddhists alike, traveled from many far reaching areas of Ladakh and beyond, lining the streets with their Khatas, prayer beads, and offerings, celebrating the blessings of this most fortunate visit by His Holiness. Many could be heard reciting:

"Chomden dir ni Jonpa Lek, Dak chak sonam kalpar den..." (Enlightened one, welcome, now that you have come, we have such good fortune and merit...)

While the ride from the airport could have easily have been a quick and hasty journey, His Holiness generously extended kindness and compassion toward the street lined supporters, taking his time to move slowly and deliberately along the roadway, giving all the opportunity to experience the blessings offered in the moments of his arrival.

While His Holiness will return to the Leh, Ladakh region in July 2014, giving a Kalachakra Initiation (3.7.2014-14.7.2014), this current three week visit to Ladakh is recognized to be designated for his much deserved rest and personal retreat.

Ladakh is known to be a place of serenity and gracious hospitality, but some would say that on this very auspicious day, you could feel an even greater wave of peace and good fortune wash over Ladakh.