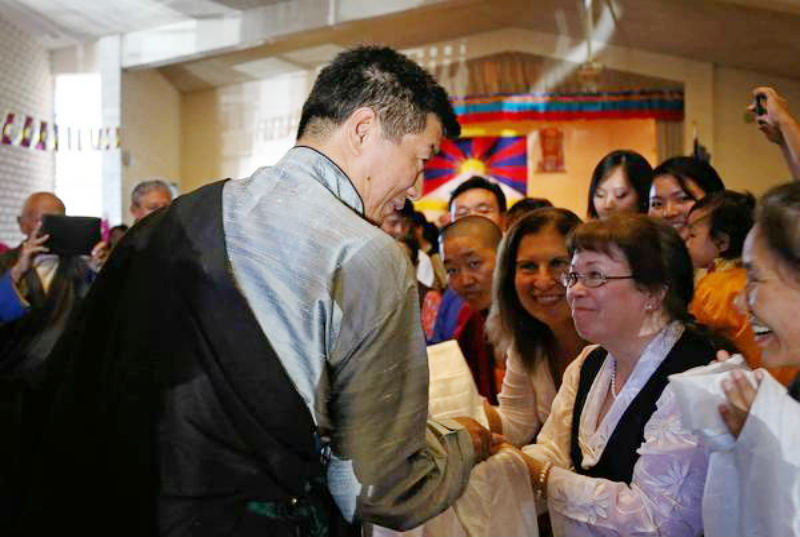 Los Angeles, US: The political leader of Tibet Dr Lobsang Sangay, on his first Los Angeles trip since becoming the political successor of His Holiness the Dalai Lama two years ago, hopes to keep alive the Tibetan struggle for freedom.

Kate Linthicum has reported for Los Angeles Times on August 27, 2013, the leader of the Tibetan government in exile is in Los Angeles this week, and although his administration is not officially recognized by the U.S. or any other regime, Tibetans living here have done their best to mark his visit with all the pomp afforded a visiting head of state.

On Sunday, they greeted him at Los Angeles International Airport with white scarves and flowers. Later, a line of shiny black cars, each festooned with a Tibetan flag, ferried him to a reception at a nearby church.

Lobsang Sangay, a Harvard-trained legal scholar, took over leadership of the exile government two years ago after the Dalai Lama gave up his political authority. Sangay is making a weeklong tour of West Coast cities with large Tibetan populations, his first as prime minister.

In Los Angeles, he's meeting with human rights groups, visiting Tibetan monasteries and giving interviews. But his most important task may be the most challenging one: keeping alive the dream of a sovereign Tibet among a community of refugees who live thousands of miles and a world apart from the Himalayan plateau.

Dr Sangay himself has never set foot in the land his parents fled. He was born in a refugee community in India and later moved to the United States to study.

Like His Holiness the Dalai Lama, the Tibetan spiritual leader who went into exile in 1959 after a failed anti-Chinese uprising, Sangay has not called for independence from China. Instead he advocates a "middle way" consisting of dialogue and nonviolence that he hopes will win more autonomy for the Tibetan region, similar to what Hong Kong and Macau enjoy today.

China's leadership has so far rejected calls for Tibetan self-determination.

On stage at Sunday's reception, where Sangay was seated at a banquet table overflowing with fruit and cookies, he said the future of the Tibetan cause would depend on younger generations of exiles taking up the work of their parents.

"Our responsibilities are very, very serious," he said. "If we don't work hard enough, Tibet could be wiped from the map."

He urged young people to work harder than their peers and pursue professional education. "You are not studying simply for a career," he said. "You are studying for a cause."

Sangay described the situation for Tibetans as "grave" and getting worse. He cited a report from Human Rights Watch that found that millions of nomadic people had been resettled in ghetto-like conditions, and he noted that the number of self-immolations has grown.

In the last two years, more than 100 Tibetans have set themselves on fire to protest Chinese rule. Though Sangay's government, along with the Dalai Lama, have officially condemned the acts, he seemed on Sunday to offer a degree of understanding.

"They want to see freedom for Tibetans," he told the audience. "Essentially what they're saying is, "We are leaving this world so that you, the Tibetans, can have freedom."

After the reception, Sangay posed for pictures with locals. He was elected in 2011 with 55% of 50,000 votes cast by exiled Tibetans living in 30 countries.

According to the Tibetan Assn. of Southern California, 268 Tibetans live in the area from San Diego to Santa Barbara. The community is small but active. The group organizes protests whenever Chinese dignitaries are in town and runs a Sunday school for children to help preserve the Tibetan language.

Chok Tsering, who lives in Hawthorne, said it always feels right when the community gets together. "It's a very good feeling when you see Tibetans sharing the same food and talking in our language," he said.

He remembered Dr Sangay from New Delhi, where in the 1990s they served at different times on the leadership of the Tibetan Youth Congress.

"He would not be in this position right now if he was not passionate," Tsering said. "He's always active, he's always sharp."

While some Tibetans have criticized the exile government for not pushing for independence, Tsering said he supported the middle way approach embraced by Sangay, who leaves Tuesday for Utah.

Sangay was not the only representative of a government not recognized by the U.S. to come to town this month. Taiwanese President Ma Ying-jeou was also here briefly.

Although Taiwanese presidents have traditionally kept their U.S. stopovers low-key, Ma had planned to greet supporters in Chinatown in a rare public appearance that was a sign of improving relations with China. Ma had to cut his trip short to deal with a typhoon back home and did not go to Chinatown, but he did meet with local Taiwanese American leaders.