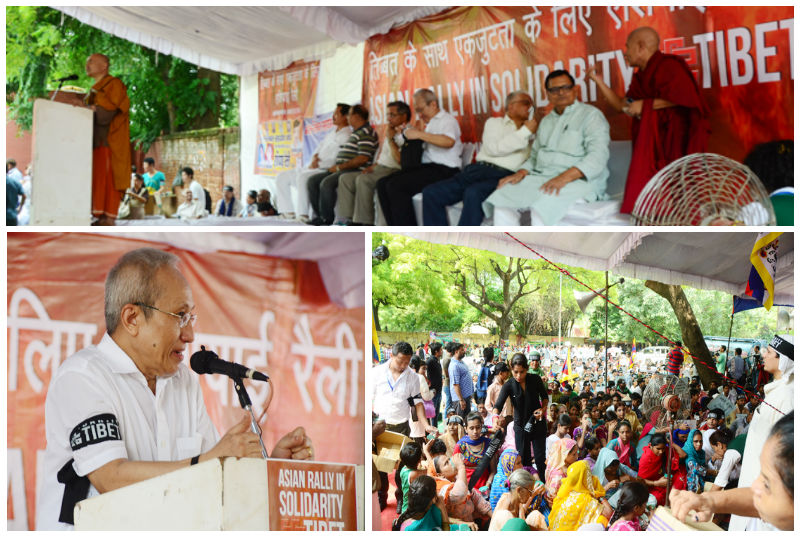 New Delhi: - Tibet supporters from different parts of Asia Monday, August 26 held a massive rally at Jantar Mantar in the centre of India's capital New Delhi to express solidarity with the Tibetan people and raise concern over environmental repercussions of China's policies on billions of people in Asia living on river water originating from the Tibetan plateau.

The rally was organised by the Core Group for Tibetan Cause-India, Asian Tibet Support Groups and facilitated by the India-Tibet Co-ordination Office based in New Delhi.

According to the Central Tibetan Administration, people from all walks of life, including political leaders, former army officials, religious leaders, students, teachers and social activists from Burma, Japan, Bhutan, Sri Lanka, Nepal and India, took part in the rally at Jantar Mantar, which was held against the backdrop of alarming number of self-immolations by Tibetans to protest against the Chinese government's repressive policies.

Over 120 Tibetans have set themselves on fire calling for the return of His Holiness the Dalai Lama to Tibet and freedom for Tibetans.

Several Indian parliamentarians who were intended to join rally could not do so due to the ongoing parliamentary session, the organisers said.

Addressing the rally, Dr. Tin Swe, a former member of Burmese Parliament, expressed his deep solidarity with Tibet and said the Tibetan struggle is always close to his heart because it is a fight for truth and justice. He added that the Burmese people has always supported the just cause of Tibet.

Mr Abdul Rasool Khan, a retired colonel and veteran of the 1962 Indo-China war, said India should have done more for the cause of Tibet. He said it is the sacred duty is India to strengthen the Tibetan movement for a free Tibet and help alleviate the sufferings of the Tibetan people.

In his address, Mr Indresh Kumar, patron of Bharat Tibet Sahyog Manch and long time friend of Tibet, said a resolution of the issue of Tibet would ensure the security of India.

Mr Vijay Kranti, a long time supporter of Tibet and Tibetan people, said India has never shared a common border with China before 1949, adding that China's invasion of Tibet has created a persistent border conflict with India and other neighbouring countries.

He expressed deep concern over the Chinese activities on the rivers of Tibet, which he said could wreak havoc on the downstream countries.

Speaking to the media after the rally, Dr. N K Trikha, national convenor of the Core Group for Tibetan Cause-India, said Tibetans are suffering untold brutality in Tibet under the severe repression imposed by the Chinese government. He said that it is not the Chinese people but the Chinese government that is trying to annihilate Tibet's identity and culture with its failed policies.

He expressed hope that the efforts of the Tibet support groups will restore freedom and rights denied to the Tibetans by the Chinese government.