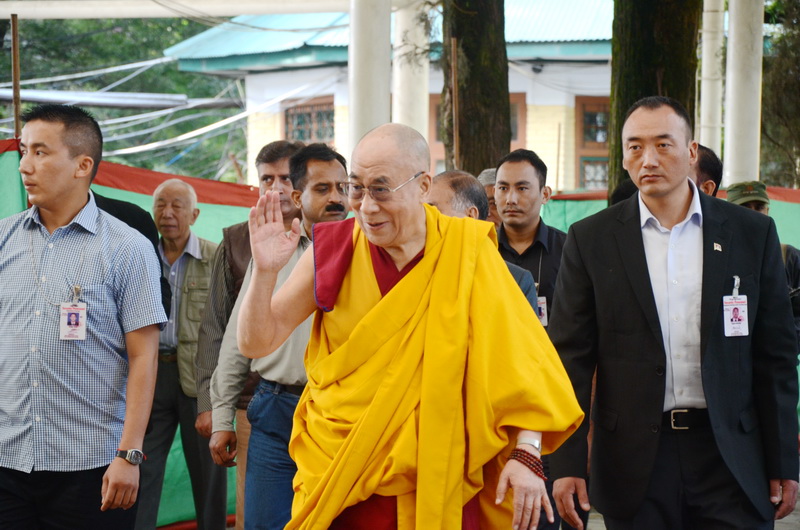 Dharamshala, 3rd September 2013: Addressing over 6000 devotees, including at least 450 guests from Southeast Asia, His Holiness the Dalai Lama of Tibet began His continued teaching on Shantideva's "A Guide to the Bodhisattva's Way of Life" at the Main Temple in Dharamshala, India.

Dharamshala, 3rd September 2013: Addressing over 6000 devotees from 61 countries, including at least 450 guests from Southeast Asia, His Holiness the Dalai Lama of Tibet began His continued teaching on Shantideva's "A Guide to the Bodhisattva's Way of Life" at the Main Temple in Dharamshala, India.

Continuing the text from previous teachings at chapter eight, devoted followers were given remarkable insight into one of Tibetan Buddhism's most pivotal texts, by one of the 21st centuries' most revered leaders. The teaching was given at the request of disciples from Southeast Asia, who were warmly welcomed to the exile home of the esteemed spiritual leader.

Amid the foothills of the Indian Himalaya, the teaching began at 8am with the recitation of 'Sherab Nyingpo' (Heart Sutra) by the Buddhist guests. His Holiness the Dalai Lama warmly welcomed His disciples, and reiterated the need for different religious traditions to foster respect and harmony for each other.

"As one follows a particular religion according to one choice and disposition aiming to bring positive changes in mind, so it is very important to have the freedom to worship".

Despite the ever changing face of modernity and material development, His Holiness emphasised that: "Material development is necessary; we have this body so we need some facilities to bring physical comfort and it is very important. If all our physical and mental energy concentrates only on material values, then it is quite unfortunate. We have this marvellous human intelligence."

Highlighting the need to look beyond the borders of religion, He added: "The world also has a considerable number of people who don't believe in religion and like the believers, they too want happiness. So, it is very important to respect each other and practice warm-heartedness and morality, which are sources of happiness and peace of mind". His Holiness also fondly recalled His youth in Lhasa, and the understanding fostered between Buddhists and Muslims in Tibet.

The focal text Shantideva's "A Guide to the Bodhisattva's Way of Life" consists of a long poem describing the process of enlightenment from the first thought, to full Buddhahood, and is still studied by Mahayana and Vajrayana Buddhists to this day.

It consists of ten chapters dedicated to the development of Bodhicitta (the mind of enlightenment) through the practice of the six perfections, and His Holiness offers to focus on Chapter Eight of the text over the period of two and a half days for the teaching, which is also broadcast live. His Holiness will continue to speak in Tibetan, with English, Chinese, and Vietnamese language translations available. The teaching continues on September 4th at 8am (IST), and a live webcast is available at http://dalailama.com/live-english