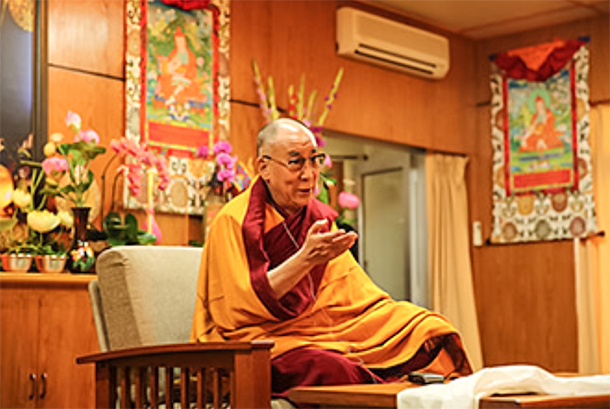 Dharamshala, India - 7 November 2013: - The spiritual leader of Tibet His Holiness the Dalai Lama met with 71 Vietnamese CEO's, artists and intellectuals. Mostly women, he began by emphasising his and their common humanity.
His Holiness said that neurologists will tell you that Tibetan and Vietnamese brains are the same, along with emotions and intelligence. "Therefore, we have the same potential to think more deeply about the situation we find ourselves in."

He remarked that society and our education system is oriented toward material development and values, which results in a general lack of moral principles. He discovered from his guests that the Vietnamese economy has grown immensely over the last 30-40 years, that literacy is about 95% and there are probably only 2 billionaires in the country.

He commented that corruption has become like a cancer in the world and it is mostly the poor who suffer. This and climate change are among the major challenges today. Corruption takes place because of a lack of ethics. His Holiness suggested that ways must be found to instil basic values like honesty into the younger generation - otherwise corruption will continue to fester. This is why he believes so strongly in fostering secular ethics in the education system, giving a basis to resolve the majority of today's problems.

Inviting questions from the audience one woman said she was a Buddhist and when her friends ask for help and advice she tells them to ask the monks. They insist they are more interested in what she has to say, so what should she do? His Holiness replied that in a world increasingly interdependent it is time to develop global responsibility and help each other and promote human values.

Another questioner said that she knew people who didn't find prayers and ritual helpful and His Holiness replied that if this was the answer to overcoming suffering the Bodhisattvas would already have done it. The Buddha, he said, shows us the path to truth and reality and it is up to us to follow it.

His Holiness observed that at an inter-religious conference in India, all religions tended to address three questions: What is the self? Does it have a beginning? and Does it have an end? "He explained that only Buddhism teaches that the self is not something that has a solid, independent existence, but is designated on the basis of body and mind."

Referring to the four Noble Truths he highlighted two patterns of casualty: suffering and its cause as described by the first two truths and cessation and the path to it outlined in the third and fourth truths. Cessation of suffering, he said, is brought about by practicing the path and that the path consists of three trainings in concentration and wisdom based on ethics.