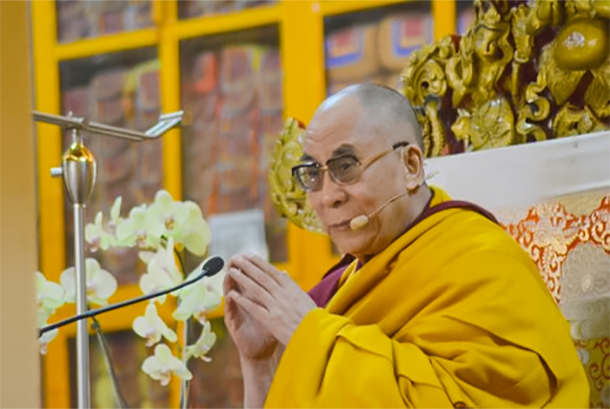 Dharamshala: - The spiritual leader of Tibet, His Holiness the Dalai Lama, on November 11 expressed his sadness and concern over the great loss of lives and damage to property caused by the Typhoon Haiyan in Philippine.

"In a letter to the President of the Philippines, His Excellency Benigno Aquino III, His Holiness the Dalai Lama expressed his sadness by the loss of so many lives and the extensive damage caused as a result of Typhoon Haiyan that struck the Philippines on Friday," the Office of His Holiness the Dalai Lama said in the condolence statement which issued on November 11 2013.

"His Holiness offered his condolences and prayers to the families that have lost loved ones and been affected by this catastrophic natural disaster," the condolence statement said.

The statemen added: "As a token of sympathy and concern, a donation is being made from The Dalai Lama Trust to support the relief work."

Four days after the typhoon struck, only a trickle of assistance has made it to affected communities along the eastern seaboard, which bore the brunt of Typhoon Haiyan. Authorities estimate it killed 10,000 or more. Millions are without shelter or food.

The typhoon that destroyed entire towns across the Philippines is believed to have killed more than 10,000 people and displaced more than 600,000, authorities said on Sunday, which would make it the country's deadliest recorded natural disaster.

Authorities said at least 9.7 million people in 41 provinces were affected by the typhoon, known as Haiyan elsewhere in Asia but called Yolanda in the Philippines. It was likely the deadliest natural disaster to beset this Southeast Asian nation.

The Philippines, an archipelago nation of more than 7,000 islands, is annually buffeted by tropical storms and typhoons, which are called hurricanes and cyclones elsewhere.

The impoverished and densely populated nation of 96 million people is in the northwestern Pacific, right in the path of the world's No. 1 typhoon generator, according to meteorologists. The archipelago's exposed eastern seaboard often bears the brunt.