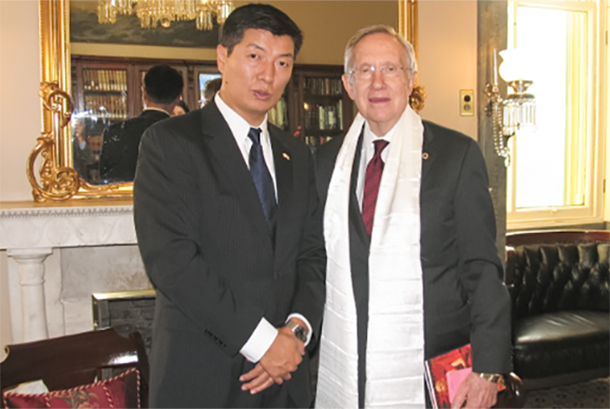 The Sikyong also spoke about his assumption of political leadership of the Tibetan people and the efforts of his Administration to draw attention and resolve the Tibet issue. Representative Kaydor Aukatsang and the Senator's Senior Foreign Policy Advisor were also present at the meeting.

With this important meeting and an earlier meeting with Congressman Ed Royce – Chairman of the House Foreign Relations Committee, the Sikyong has now met with most of the top US Congressional leaders. In his earlier visits to Washington, he met with House Speaker John Boehner, Leader Nancy Pelosi, and Senator John Kerry then Chairman of the Senate Foreign Relations Committee.

The Sikyong stopped in New York on November 11 before arriving in Washington for his fourth official on November 12. In New York he met with two senior editorial board members of The Wall Street Journal, former Senator Joe Lieberman and Nicholas Kristoff, the Pulitzer Prize winner columnist for The New York Times. "Great chat today with Lobsang Sangay, Tibetan leader, about escalating repression in Tibet. Sad to see the oppression there," Kristoff tweeted after the meeting to his close to 1.5 million followers.

Upon arriving in Washington, the Sikyong and his delegation consisting of Representative Kaydor Aukatsang and Private Secretary Jigmey Namgyal were received at the Washington train station by leaders and members of the Capital Area Tibetan Association.

In addition to the meetings with Senator Reid and Chairman Royce, the Sikyong has also met with the Washington bureau chief for The Huffington Post, Maria Otero and Paula Dobriansky – the two former US Under Secretaries and Special Coordinators for Tibetan Issues, key staffers of the Senate Foreign Relations Committee, and Congresswoman Zoe Lofgren with whom he discussed immigration-related issues.

In all his meetings, the Sikyong has been speaking of CAN, his Administration's commitment to the Middle Way Approach, and requesting more support for Tibet and Tibetans. CAN is the three-phased integrated approach of Consolidation, Action and Negotiations (or dialogue) that serves as a broad strategic policy road map for the current Tibetan Administration in Dharamsala.