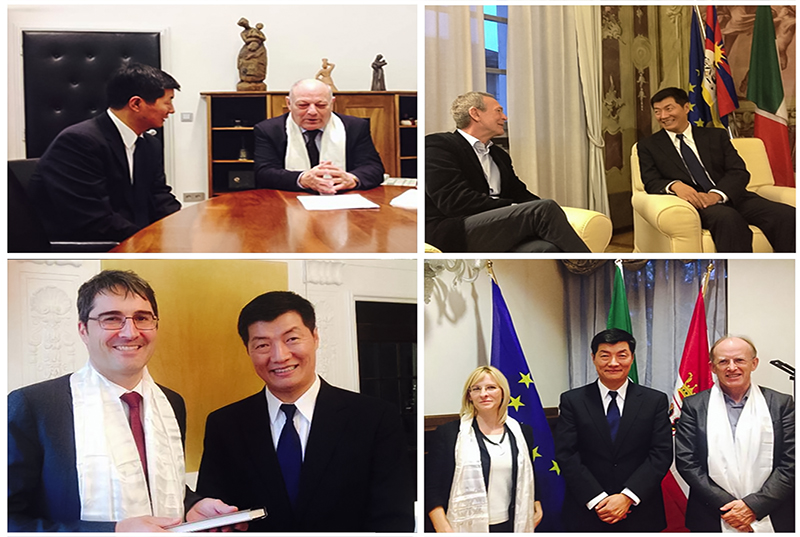 Dharamshala: - 'The situation on the ground in Tibet wasn't getting,' Dr. Lobsang Sangay, Sikyong or political leader of Tibetans said, adding that the autonomous status enjoyed by the people of the provinces in Italy is possible for Tibet.

During his two-day visit to autonomous provinces of South Tyrol and Trento in northern Italy, Sikyong Dr. Lobsang Sangay, the political leader of the Tibetan people met with top officials, including President Luis Durnwalder of South Tyrol.

Top officials of the autonomous provinces of South Tyrol and Trento in northern Italy expressed strong support and solidarity for the Tibetan struggle for freedom.

During meeting with President Luis Durnwalder of South Tyrol on Monday, 19 November,2013, he told the Tibetan political leader that "he was very happy of his 25 years association with Tibetans."

Dr. Lobsang said he was visiting long time friends in the autonomous provinces of South Tyrol and Trento in northern Italy. "The two provinces enjoy legal autonomous status within the political structure of the Italian Republic," he said.

Sikyong also met with Dr. Arno Kompatscher, the President designate of South Tyrol and briefed him about 'the present situation in Tibet and also thanked him for the long friendship and support to the Tibetan people.'

Dr. Kompatscher pledged his continued support. He said "he first met His Holiness the Dalai Lama as a student in 1997 and more recently during His Holiness' visit to Bolzano in April 2013."

In the evening, the Tibetan political leader drove to Trento, the capital of Trentino autonomous province. He met with Mrs. Sara Ferrari, newly appointed Commissioner for International Solidarity of the Province of Trento and Mr. Bruno Doringatti, President of the Provincial Council of Trento.

Dr. Sangay briefed Mrs. Sara Ferrari about the Telemedicine and drinking water projects financed by the Trento provincial government. He said that he had visited both the project areas in India.

The telemedicine connection was inaugurated between the Tibetan settlement in Mainpat and Telerad RXDX in Whitefield, Bangalore in late May 2013. Tibetans living in Ladakh are benefiting from the drinking water project.

During his meetings in Bolzano and Trento, Dr. Sangay said, "We are advocating to resolve the Tibetan issue through non-violence and dialogue based on the Middle Way Approach."

Dr. Sangay said that "the Tibetans are seeking genuine autonomy. The freedom enjoyed by the people of the autonomous region of Bolzano and Trento shows that autonomous status for the Tibetans within the framework of the People's Republic of China is possible."

In responding to questions about the situation in Tibet, Dr. Sangay said that "the situation on the ground in Tibet wasn't getting better. He said 122 Tibetans had self-immolated in Tibet, demonstrations against mining and dam construction continue in Tibet."

"I am very concerned about the present situation in Tibet, as we continue to hear very sad news from Tibet," said Mr. Bruno Doringatti, the President of the Provincial Council of Trento. "I wish to strengthen our relationship between Trento and the Tibetan people."

Sikyong also had a brief meeting with Mr. Bruno Dorin, President of the Provincial Council of Trento and Mr Roberto Pinter, former parliametrain and also a long-time supporter of the Tibetan people's right to self-determination.

"Sikyong had a successful visit to the autonomous provinces of Italy to further strengthen our friendships between the people of the two Italian provinces and Tibet," Tenzin Khando, a Tibetan currently living in Trento told The Tibet Post International.

The Tibetan Community in Italy's President Mr. Nyima Dhondup and community members welcome their political leader on his arrival in Bolzano.

Sikyong also met with Researcher at the European Academy, Bolzano - Institute for Minority Rights and the Institute for Studies on Federalism and Regionalism in Bolzano, South Tyrol, Italy.