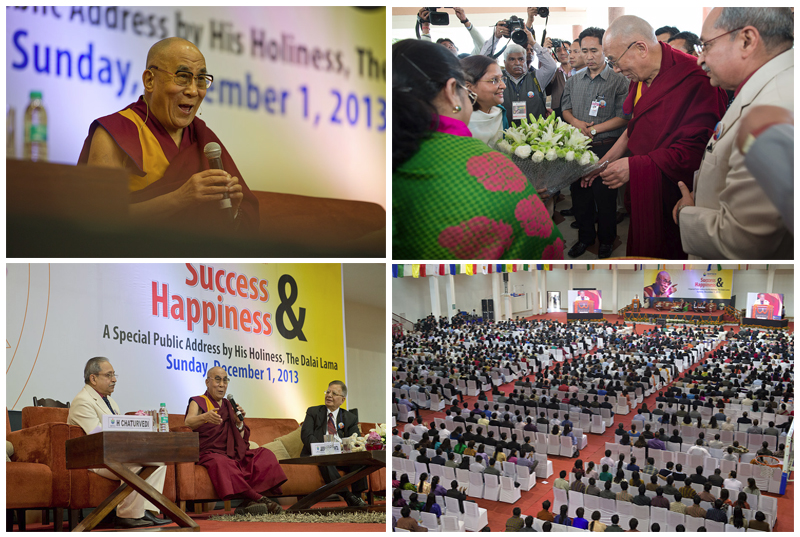 Dharamshala: - The Birla Institute of Management Technology (BIMTECH) invited His Holiness the Dalai Lama to address a select gathering of corporate leaders, civil servants, academicians, professionals, and diplomats today as part of its 25th anniversary celebrations.

"It's a great honour for me to have this opportunity to share my views and experiences with brothers and sisters like you," His Holiness said.

"I consider myself to be just another human being with not much difference between us. I remember it was perhaps 20th April 1959 that I reached Birla House in Mussoorie after several days journey by train. Soon afterwards, Pandit Nehru came to see me," he said.

"I met him for the first time in Peking in 1954, then again at the time of the Buddha Jayanti celebrations in 1956. By then there was already trouble in Tibet and I told him I was thinking of not going back. He advised me that it would be better to go back and to try to manage the situation on the basis of the 17 point agreement," he added.

"It's been nearly 55 years since I came to stay at Birla House. I lost my home and found a new one in India, a country I'd always felt close to because of my studies. The Government of India took care of us. I am a refugee, but I'm also the longest staying guest of the Indian government. As a result of India's help and the freedom I've enjoyed here, I've learned many things; among them the ancient Indian concept of ahimsa or non-violence."

His Holiness went on to say that "peaceful, non-violent action is related to warm-heartedness, which is something we need to promote on the basis of secularism. Because India is a multi-religious society, the freedom fighters decided there should be a secular constitution. It wouldn't work to impose one religion or another, whereas secularism, from the Indian point of view, is respectful of all religions and even of the right to be agnostic."

He said we need to reflect on our common experience: our birth from our mothers and the affection with which she cared for us, give us the ability to be affectionate to others.

"Nobody wants problems, but we create them. They spring directly from our self-centred attitude. The opposite of this, compassion and concern for others is the key factor in the creation of a more peaceful world. If we base our compassion on religious faith, there'll be limits to it. If, instead, we take a secular approach, there are no limits to what we might achieve."