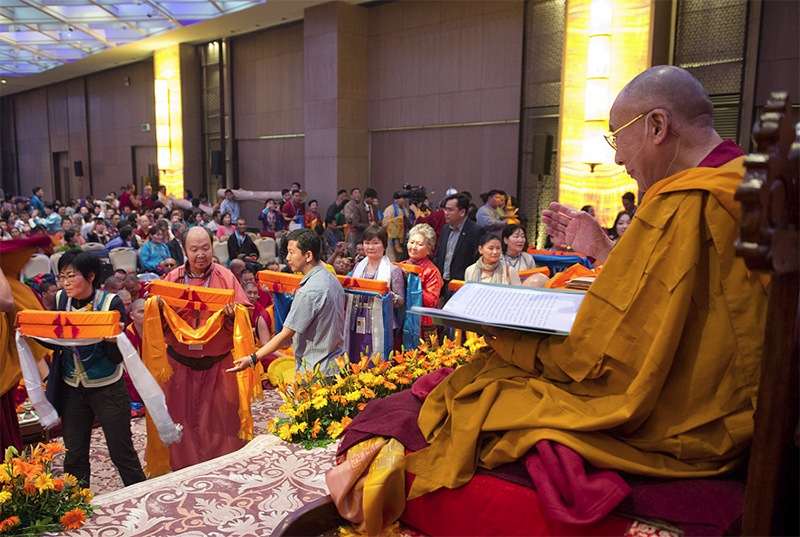 Prayer offering for long life of the spiritual leader of Tibet

New Delhi: - The day was just breaking as the spiritual leader of Tibet His Holiness the Dalai Lama arrived at the Kempinski Hotel on Wednesday morning to perform the various preparatory rites for the Vajrabhairava Empowerment.

The hall was quiet and virtually empty when he began, but towards the end of his rituals, two Mongolian musicians began to play poignant lilting melodies on their bowed, stringed instruments.

Once His Holiness was seated on the throne, the Mongolians proceeded to offer prayers for his long life, based on the 'Offering to the Spiritual Master' (Lama chopa), which they recited in Tibetan. When it was done, His Holiness said:

"First of all, thank you all very much for making this Long-life Offering. I noticed that in the section for eulogy and appeal, you recounted the relationship between Mongolians and the Dalai Lamas. When the Third Dalai Lama, the omniscient Sonam Gyatso, was leaving for Mongolia, an attendant took the reins of his horse and uttered this prayer: 'May you, the lamp of Je Rinpoche's teachings, dispel the darkness of sentient beings.' He went on to establish the Dharma, particularly the Gelugpa tradition, firmly on Mongolian soil."

He continued, "When I made my first visit to your country in 1979, a long-life ceremony was offered during which those making the prayers wept, which brought tears to my eyes too. However, the person who brought the tsog had tried to put on a hat that turned out to be too small for his broad skull, so he'd simply laid it across his head instead, which I remember made me laugh. Since then, I've been to Mongolia several times, although there may be some who only think of it as a reason they can't drink vodka. Anyway, we'll meet again and again in the future."

Once the empowerment was complete, he remarked that dedicated practitioners take the necessary parts of the empowerment as and when they need them. By request, His Holiness gave a reading transmission of a prayer for the swift return of Kalka Jetsun Dhampa, who passed away in Mongolia nearly two years ago. Proceedings were completed with a tsog offering and His Holiness gave his concluding advice:

"We've finished this Dharma discourse for Mongolians. Now the most important thing is to make an effort to cultivate the awakening mind and a realization of emptiness."