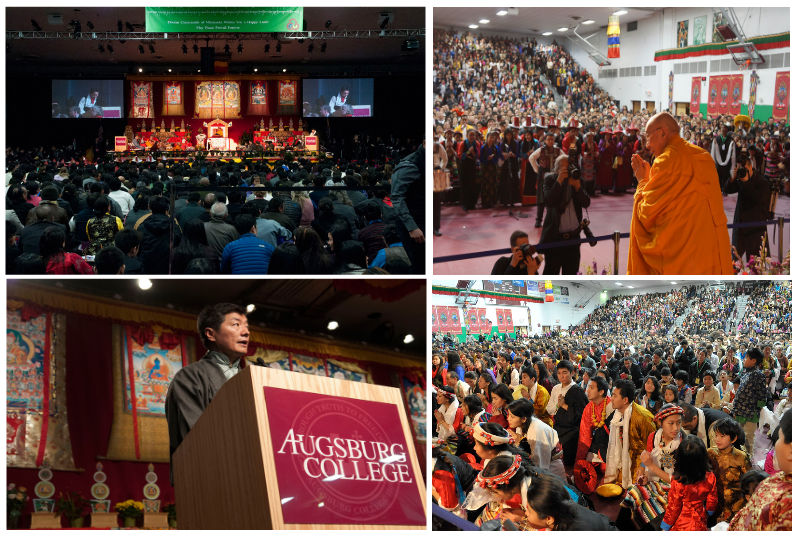 Minneapolis, MN, USA , 4 March 2014 – The 2nd of March, the first day of the Tibetan New Year, dawned bright and clear after a string of cloudy days.

As His Holiness the Dalai Lama drove to Augsburg College in for Losar celebrations organized by the Tibetan American Foundation of Minnesota, the sun shone brilliantly, reflecting off the snow piled along the road and catching the breath-like vapor trails of the cars.

His Holiness was accorded a full traditional Tibetan welcome on arrival. He participated in lighting a Tibetan butter lamp after which everyone stood at attention for a rendition of both the Tibetan and American national anthems.?The Tibetan Community President made a brief report and offered the mandala and three representations of the enlightened body, speech and mind to His Holiness. This was followed by a Long Life Offering made to His Holiness.

In his welcome address, leader of the Minnesota Tibetans, Namgyal Dorjee acknowledged the distinguished guests, His Holiness, the Sikyong, Congresswoman Betty McCollum, Congressman Keith Ellison, and Minneapolis Mayor Betsy Hodges. He noted that this was the first time His Holiness had celebrated Losar in the West and that Minnesotan Tibetans considered it most auspicious that he was spending it with them.

Sikyong Dr Lobsang Sangay greeted all 2500 people present and expressed a prayer that all His Holiness's wishes be fulfilled. He noted how opportune it had been that His Holiness had recently been able to meet with President Obama. Congresswoman Betty McCollum concluded her speech with the declaration that it is time for Tibet to be free of violence and oppression.

Congressman Keith Ellison in turn stated that it was time for the Chinese government to show respect for religious and cultural differences. He said it should open up, specifically open up to a direct dialogue on the matter of a genuinely autonomous Tibet.

Mayor Betsy Hodges opened her speech with a resounding "Losar Tashi Delek". She issued a proclamation to His Holiness naming today His Holiness the Dalai Lama Day of Peace in Minneapolis. Finally, Tashi Namgyal read a message from the Speaker of the Tibetan Parliament in Exile which concluded with the prayer that His Holiness's wishes be fulfilled, a prayer that he lives long and that Tibetans may soon be united once more within Tibet.

Young Tibetans performed songs and dances that represented the Three Provinces of Tibet with vigor and joy. The time came for His Holiness to speak:

"Democratically Elected Leader, Lobsang Sangay, Regional Tibetan Leaders, Congress Representatives, Lady Mayor, monastics and lay-people, our special guests of honor have come and spoken up for us - thank you. I'd like to start by greeting all Tibetans, not only those here, but all those outside and inside Tibet. Tibetans are not very numerous, but we have our own literature and language, which today is the most appropriate language in which to discuss Buddhism.

All religious traditions teach about love and compassion, tolerance, forgiveness and contentment. The special emphasis in Buddhism is the use of reason. The Buddha taught a path leading to good rebirth and liberation. A thorough explanation of these teachings exists in Tibetan, an explanation more comprehensive that in any other language, which is something to be proud of."

"When we first came into exile, the only thing we knew for certain was the earth and sky. Reaching Mussoorie we had no idea what would happen to us. As time went on, we survived by relying on non-violence and the power of truth. I was 24 then and I'm nearly 79 now. In addition to the power of truth, we experience the power of compassion. We've done our best and kept our peace of mind."

His Holiness said that the most important thing is transforming the mind. He said that the generations were changing and yet the Tibetan spirit remained strong. He told those assembled that he was thinking of doing the ceremony for generating the awakening mind of bodhichitta as his gift to all present. He said it is not enough merely to recite the verse of taking refuge and generating the awakening mind, you have to understand that we take refuge with a view to ultimately attaining omniscience, which is Buddhahood. That intention to become a Buddha is based on an understanding of emptiness. We experience suffering because of ignorance and the Buddha showed a path to overcome that.

His Holiness led the assembly in reciting the verse for generating the awakening mind of bodhichitta. He gave the transmission of several popular mantras and then called on everyone to join him in reciting Om mani padme hung for the benefit of their brothers and sisters in Tibet. At the end, he said:

Later that same afternoon, His Holiness drove to Macalester College, where he first met with a group of students from the Neuroscience Department who presented him with an appreciation of his interest and contribution to their discipline.