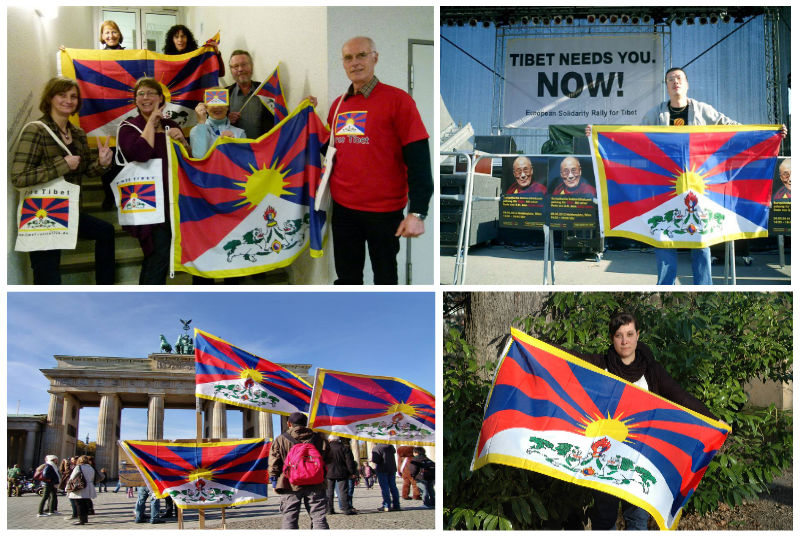 Berlin, 03.03.2014: - As a part of their “Raising your flag for Tibet!” campaign, the German pro-Tibet organization Tibet Initiative Deutschland (TID) is demanding German Chancellor Angela Merkel advocate for the oppressed nation.

On March 10th, the group will remember the Tibetan uprising of 1959, an event on which Chinese occupational forces brutally suppressed oppositional forces in the Tibetan capital of Lhasa. The clash is believed to have resulted in thousands of casualties. TID has garnered nationwide support for this campaign within Germany, and reports that “hundreds of cities and municipalities across Germany are raising the Tibetan flag on town halls and public buildings” to commemorate the 1959 uprising.

TID Board Member Tsewang Norbu argues this campaign is valuable for several reasons, including the solidarity it illustrates. “Raising the flag for Tibet means showing support for the Tibetan right to self-determination and the protection of human rights.” TID believes this camaraderie is particularly necessary due to recent events that have occurred on the international level.

Despite the fact that over 127 Tibetans have self-immolated to protest China’s clutch on Tibet, the global community still elected China to the UN Human Rights Council. Many international actors have argued this appointment will force the Asian power to a higher level of accountability in issues relating to human rights, but TID worries this will not occur.” Mr Norbu stated earlier this week, “We are shocked by the discrepancy between China’s actions and its position in the world.”

The TID leader further evidenced this claim by arguing, “The Spanish government relenting to this pressure in the court case to indict former Chinese leaders of genocide in Tibet is a recent example showing the extent to which China has already succeeded in interfering with and overriding our democratic systems.”

The “Raising your flag for Tibet!” campaign therefore seeks to foster support for Tibet that will translate into meaningful gains in the oppressed nation. Chinese President Xi Jinping will meet with Chancellor Merkel in late March for a state visit, by which time TID hopes to have convinced Ms Merkel to request “the Chinese government to re-engage in a dialogue with the Tibetans and to stop the spiral of violence.”

Campaign participation does not come without its costs – TID’s Campaign Coordinator Anna Momburg-Vanderpool warns, “Our campaign participants are pressured by Chinese officials to withdraw from the campaign and not to raise the Tibetan flag. The long arm of the Chinese government is even reaching the smallest German towns.”

Despite these pressures, TID has still been effective in recruiting numerous individuals. Membership spans across demographics and industries, even including Vice President of the German Parliament Claudia Roth and Chinese writer and dissident Liao Yiwu.

Musicians and actors such as Judith Holofernes, Benno Fürmann, Ralf Bauer as well as Chinese writer and dissident Liao Yiwu are also participating and raising the flag for Tibet.

Additional statements of prominent voices can be found here: www.tibet-flagge.de/causes-category/starke-stimmen/