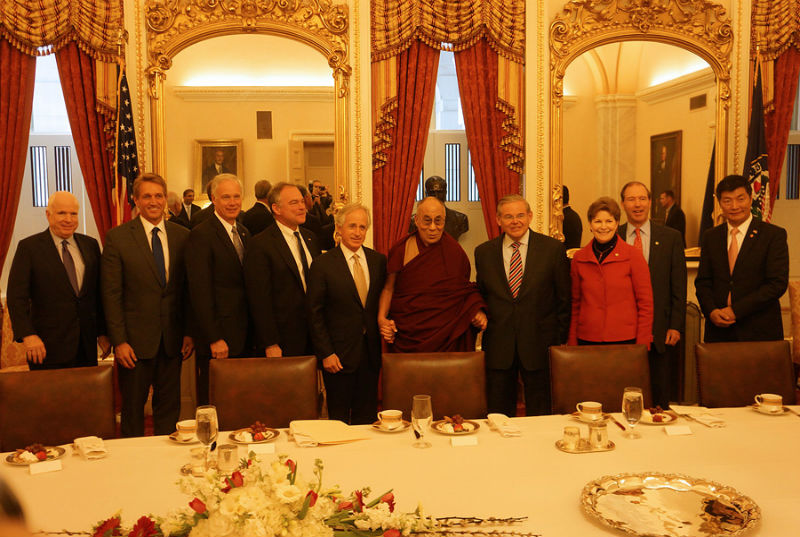 Dharamshala: - The spiritual leader of Tibet His Holiness The 14th The Dalai Lama visited Capitol Hill on Thursday, 6, March 20014 and offered prayers of joy, good fortune and the fulfillment of wishes Thursday morning as he helped open formal proceedings of the U.S. Senate.

At the invitation of Senate leaders, the spiritual leader of Tibet and Tibetan people ascended the dais in the chamber, opened the session with his favorite prayer and words of advice.

"With our thoughts, we make our world," said His Holiness the Dalai Lama. "Our mind is central and precedes our deeds. Speak or act with a pure mind and happiness will follow you like a shadow that never leaves."

The Nobel peace laureate from Tibet spoke first in Tibetan, and then, in what he described as "my broken English," he prayed: "May there be joy in the world with harvest and spiritual rest. May every good fortune come to be and may all our wishes be fulfilled."

"This is my favorite prayer," he said later. "Daily I pray this. That gives me inner strength. So I am asking to serve humanity. As long as space remains and as long as beings remain, until then may I too, remain, and help dispel the misery of the world."

Senators bowed their heads as the Dalai Lama prayed. Staff filled the back rows of the chamber and visitors observed from the gallery above. The opening session drew more people than a typical start to the Senate day.

Before his prayer, Sen. Mazie Hirono, D-Hawaii, a Buddhist, had greeted the Dalai Lama, and the two clasped hands. Sen. Dianne Feinstein, D-Calif., and His Holiness the Dalai Lama bowed heads and touched briefly.

"The Dalai Lama is well-known throughout the world as a spiritual leader of the Tibetan people and for spreading the gospel of peace and compassion and love of our fellow human beings," Reid said.

Speaker John Boehner, R-Ohio, said the fight for religious freedom and tolerance has always brought Congress together, a sentiment echoed by Democratic leader Nancy Pelosi of California. She described the situation in Tibet as a "challenge to the conscience of the world."

On Feb. 21, US President Barack Obama met His Holiness the Dalai Lama and reiterated US government support for the "Middle Way Approach" to solve the issue of Tibet, despite a strong objection from the communist regime in China.

Later in the day, His Holiness the Dalai Lama met House leaders, who set aside partisan differences to welcome him.