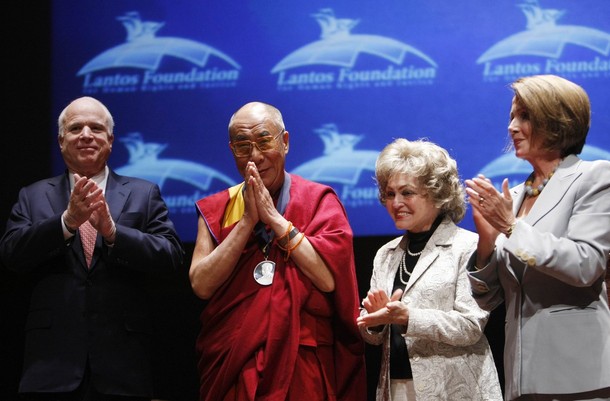 Tibetan spiritual leader His Holiness the Dalai Lama was yesterday honoured by US lawmakers with the first Tom Lantos Human Rights Prize. The award was made in memory of the late Congressman, Holocaust survivor and longtime human rights activist.

Accepting the prize, His Holiness said, "Although now I am 74 years old, the rest of my life I dedicate for the promotion of human values, emotional human affection, human compassion, equality and basic human rights in Tibet or in mainland China or everywhere."

His Holiness also criticised the United States for not fully addressing the economic divide between its poorest and richest citizens. "Huge gap, rich to poor. This is unhealthy," he said. "You have to think seriously about those less privileged people. They're also human beings.

"The real greatness of America is your ancestors' principles. When I think of America, I think of the concept of freedom, liberty, equality. I think these are real human values."

US House of Representatives Speaker Nancy Pelosi praised the Dalai Lama's work in pressing China to improve its human rights record. "Unless we speak out for human rights in China and in Tibet we loose all moral authority to talk about human rights anywhere in the world," she said.

Republican US Senator John McCain described support for the Tibetan cause as a moral responsibility.

The event was held against the background of US President Obama's decision to postpone any meeting with His Holiness the Dalai Lama. His Holiness' representatives were informed last month that the President would not meet with him until after his first official trip to Beijing, scheduled for November.

Beijing accuses His Holiness of being a ‘splittist' and, during Mr. Obama's meeting with Chinese President Hu Jintao in April, the Chinese leader repeated Beijing's demand that no foreign officials meet with His Holiness the Dalai Lama.

Before returning to India, His Holiness will participate in a conference called "Educating World Citizens for the 21st Century." He will also teach on "The Heart of Change: Finding Wisdom in the Modern World" - an event organized by the Conservancy for Tibetan Art and Culture.