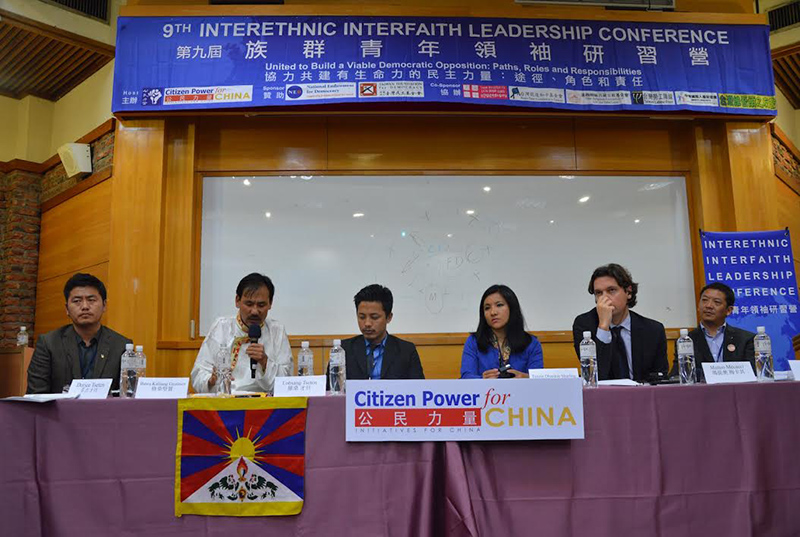 Taipei, April 28, 2014: - The 9th Interethnic / Interfaith Leadership Conference that brought together seventy participants from different nationalities, political communities and faiths, staging a struggle against the repressive Chinese Communist regime, concluded on April 27 at Taipei, the capital of Taiwan.

Seven Tibetan activists joined the democracy activists, human rights lawyers, policy makers, writers and media activists, from Mainland China, Honkong, Taiwan, Macau, Southern Mongolia, overseas Ugyur activists and representatives of faiths such as the Falun Gong and Christian Church Movement, at a conference that provided a significant opportunity to allow the participants to find a common ground to challenge the Chinese Communist Party (CCP) and thereby ensure constitutional reforms and a democratic political system in China and in areas controlled by CCP.

In a written message extending warm greetings to the participants and organizers of the conference, the Tibetan spiritual leader His Holiness the Dalai Lama said – "China needs human rights, democracy and the rule of law because these values are the foundation of a free and dynamic society. They are the source of true peace and stability. A democratic China is also in the interest of the international community in general and of China's neighbors in particular. I will have no doubt either that an increasingly open, free and democratic China will be of benefit to the Tibetan people too."

Matteo Macacci, President of International Campaign for Tibet was also present at the conference to speak about strengthening international support for Tibet.

According to Bawa Kalsang Gyaltsen, 'of the many issues concerning the situation inside Tibet, issues of gross human rights violations, the criminalization of the families and relatives of the self-immolators, particularly the death sentence meted out to Dolma Kyab, husband of Kunchok Wangmo who died after self-immolation protest in March last year, and the case of forced eviction of nomads from grasslands, were raised and discussed at the conference and the participants pledged to create a special Task-force that will coordinate actions to address the urgent situation inside Tibet.'

"At this conference, we represent Tibet as an occupied nation and managed to built a common and mutual understanding with the other struggles who have suffered equally under the repressive Chinese regime. The expressions of solidarity by all the participants, particularly democracy activists and human rights lawyers from mainland China, to the Tibetan movement, will strengthen the trust and conviction needed to build a united force for our fight against the oppression," said Dorjee Tseten.

The conference identified the core issues affecting the global movement for freedom and justice in China and in regions controlled by CCP, and discussed strategic steps to gain human rights breakthrough for Tibetan, Uighurs and Mongolians, and examine the democratic development in Taiwan and the elections in Hong Kong.

Dr, Yang Jianli, Founder and President of Initiatives of Change/Citizen Power for China, said that 'the conference was successful in getting the diverse group of participants to pledge unity and co-operation and respect in pursuit of their common goal of a—fundamental freedom and social justice and a just government in China founded upon the rule of law.'

The four-day conference held at the Chientan Youth Activity Centre in Taipei, was organized by Initiatives for China / Citizen Power for China, and sponsored by National Endowment for Democracy and Taiwan Foundation for Democracy.