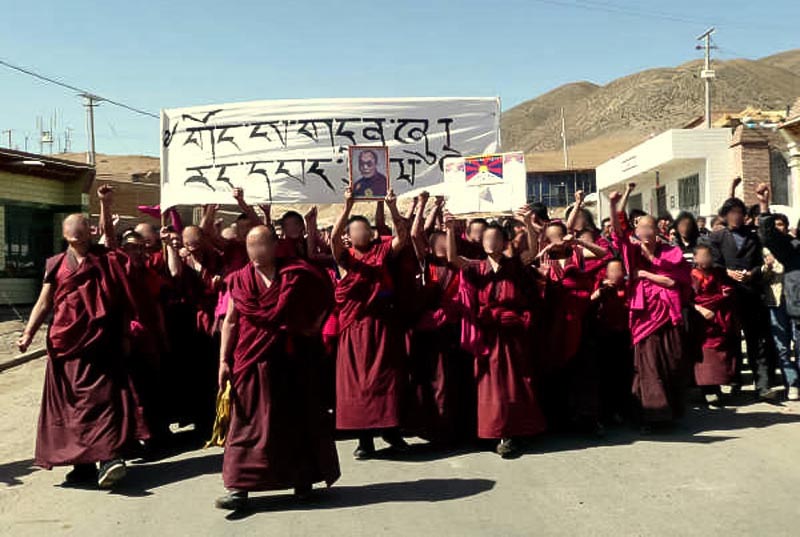 Dharamshala: - The U.S. Commission on International Religious Freedom released its 2014 annual report on April 30, criticizing the Chinese government for severe violation of religious freedom in Tibet. The commission has listed China as one of the 'countries of particular concern.

'For Tibetan Buddhists and Uighur Muslims, conditions are worse now than at any time in the past decade. Independent Catholics and Protestants face arrests, fines, and the shuttering of their places of worship. Practitioners of Falun Gong, as well as other Buddhist, folk religionist, and Protestant groups deemed "superstitious" or "evil cults," face long jail terms, forced renunciations of faith, and torture in detention. USCIRF report said.

Since 1999, the U.S. State Department has identified China as the country of particular concern over religious freedom.

'These protests are directly related to Chinese efforts to control religious practice and culture of Tibetans, but Chinese authorities view these expressions of protest as criminal activities,' the report said.

"Authorities detain senior monks for periods after self-immolations by monks associated with their monasteries, and in April 2013, officials in Dzoege, Ngaba Autonomous Prefecture, issued new rules extending criminal penalties to family members, fellow villagers, and monasteries of self-immolators," it added.

"Since the 2008 and 2009 protests in Tibetan and Uighur areas respectively, the Chinese government has intensified efforts to discredit religious leaders. There are currently hundreds of Tibetans and Uighurs in prison for their religious activity or religious freedom advocacy, including individuals arrested in the past year," it said.

The over 200-page annual report documents religious freedom violations in 33 countries and makes country-specific policy recommendations since the Commission's creation.

"With religious freedom abuses occurring daily around the world against people of all faiths and those without religious faith, the United States must by words and deeds stand in solidarity with the persecuted," said USCIRF Chairman Robert P. George.

"Religious freedom is a fundamental human right recognized by international law that guarantees to all human beings the freedom to believe or not believe as their conscience leads, and live out their beliefs openly, peacefully, and without fear."

Religious freedom also is essential to national and global security. Thus, the defense of religious freedom is both a human rights imperative and a practical necessity and merits a seat at the table with economic, security and other key concerns of U.S. foreign policy."