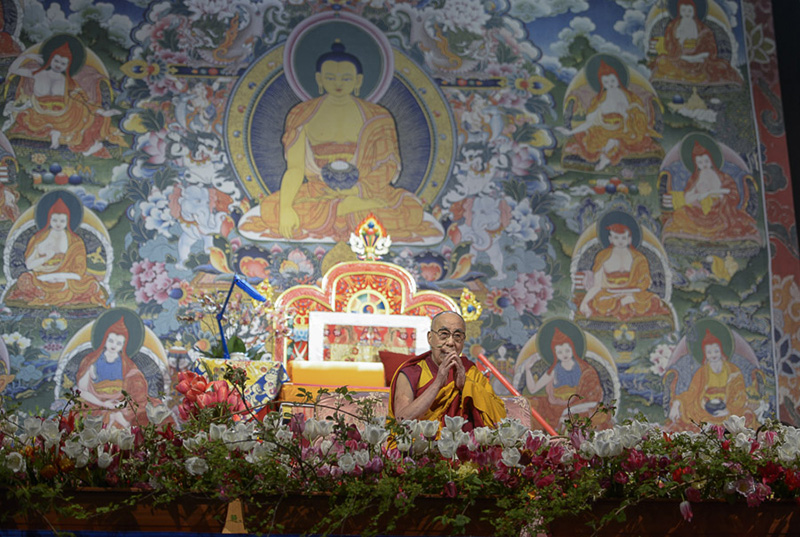 Riga, Latvia: - 'The material development provides relatively short-lived physical comfort, but not mental peace,' the spiritual leader of Tibet His Holiness the Dalai Lama said during first day of his two days of teachings in Latvia.

Many thousands of audiences gathered at the Kipsala International Exhibition Centre in Riga, the capital of Latvia, on 5 May to hear the teachings of Heart Sutra by His Holiness the Dalai Lama.

The Nobel Peace Prize laureate emphasized why religion or spirituality is relevant in today's world and answered it by explaining that spirituality is related to inner values and so to inner peace. "If material and technological development brought complete peace and happiness, people in advanced, developed countries should be really happy, and yet many are not. Material development provides physical comfort, but not mental peace," His Holiness said.

The Buddhist spiritual leader. said that 'while physical pain can be subdued by mental satisfaction, mental unease is not allayed by physical comfort. If we are worried, stressed or frightened, having a beautiful house or listening to delightful music brings little relief. A disturbed mind is not calmed by mere physical satisfaction.'

Questioning about his practice, the Nobel Peace Prize laureate said he had been meditating on love. He noted a sparkle in his eyes that indicated his tremendous satisfaction. "On the other hand I've met billionaires who have all they need and more who are very unhappy. Scientists have findings that show that a calm mind is good for our physical well-being. They also have evidence that mental training can change our attitudes, enabling us to be happier. Our human intelligence can be a source of happiness, but if misused it can also be a source of stress and worry."

The Buddhist leader said that 'only human beings develop religious faith. Such faith may have begun with worship of the sun, but in time the idea of God the creator emerged and with it the idea that since he created everything, there is a spark of God in everyone. All religions convey a message of love and compassion and because hatred is an obstacle to that, they teach tolerance and patience. And because greed is also an obstacle they teach simplicity and contentment. Non-theistic traditions like the Samkhyas, Jains and Buddhists instead of turning to a creator, teach the law of causality, the principle of cause and effect, which resembles a scientific view.'

Going through the 'Heart Sutra', His Holiness explained that things exist in dependence on other factors, so they do not exist independently. Emptiness does not make things empty; phenomena themselves are empty, because they do not have independent existence. He alluded to the interdependence between cause and effect, that something is a cause only because there is an effect.

The 'Heart Sutra' shows that independent existence is an illusion by saying "Form is empty, emptiness is form." Emptiness is a property of the form, and form is the basis of the property of emptiness. When you look for form, you find emptiness. This is what undermines clinging to intrinsic existence. He remarked that consciousness too is empty and mentioned that meditation on emptiness is effective in undermining our negative emotions; it is not just an intellectual exercise. Negative emotions are not of the nature of the mind; they do not taint its luminosity.