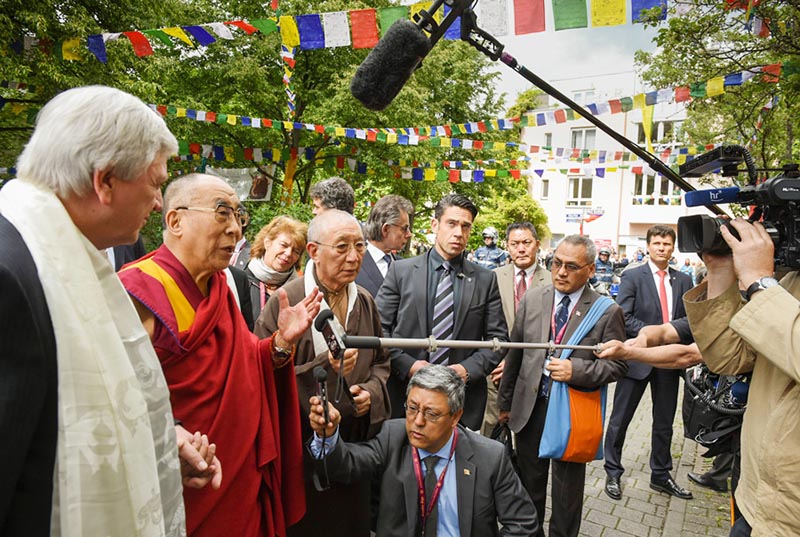 Frankfurt, Germany, 13 May 2014 – 'Tibet's cause is a just cause,' The spiritual leader of Tibet His Holiness the Dalai Lama said, adding it also concerns our rich culture, the preservation of which is a priority for Tibetan people.

After driving from Amsterdam to Frankfurt, His Holiness was interviewed by ARD, Germany's leading television broadcaster, correspondent, Cécile Schortmann's opening question was: "You've been here before, why have you come this time?"

His Holiness responded: "I don't come of my own accord; I come in response to invitations. I think that if you receive an invitation it's only sensible to respond to it. On my first visit to Europe in 1973, which included Germany, I talked about our need for greater global responsibility. I remember that before I set out, the resident BBC correspondent in Delhi, Mark Tully, asked me why I wanted to travel abroad and I told him I consider myself to be a citizen of the world. Wherever I go and whoever I meet I regard as human beings like me. I feel it's necessary to let people know about the importance of peace of mind, that we need inner peace to create peace in the world and that peace of mind is essential even for our physical health. More and more people seem to be interested in this. My additional commitment is to also encourage inter-religious harmony."

When she asked His Holiness's view of what is going on in Ukraine, he told her that Russia needs the West and the West needs Russia, to think only in terms of 'us' and 'them' is unrealistic. We need each other as human brothers and sisters. He said he looks to the future and there is a need to remain optimistic. The two sides need to meet and talk. This is an example of how the 21st century should be a century of dialogue. Trying to solve the problem by force is a mistake. The goal and motivation may be good, but because of its unpredictable consequences the use of force is out of date. Observing that Germany is at the heart of Europe and its economy is the strongest in the EU, he recalled that even during the Cold War Willy Brandt maintained Brezhnev's trust.

Ms. Schortmann asked why His Holiness keeps talking about inner peace and he replied that to create a peaceful world we first need inner peace. World peace cannot be built on the basis of anger and jealousy, nor on the basis that 'we' must win and 'they' must lose.

"I also used to propitiate this spirit, so I have experience of the ignorance they are labouring under. When I realized there was something wrong with it, I stopped doing it. More and more people came to know that and asked about it. It was necessary to tell the truth; it is my responsibility to tell the truth, to explain the reasons why I stopped that practice. Whether people listen or pay heed to what I say is up to them."

Blume mentioned that last time he was here, His Holiness addressed the Parliament of the State of Hesse in Wiesbaden. He asked if he was disappointed not to do so this time. His Holiness said that similar questions had been raised in Oslo and clarified that his visit is entirely non-political and that his main concern is to talk to the public about human values and inter-religious harmony.

His Holiness drove to Tibet House, Germany, where he was welcomed by Minister President Volker Bouffier, who told him: "Your Holiness, we are very happy to be meeting with you and to give you the opportunity to share your message with us. We have for decades admired you and your work for peace and freedom in Tibet. In Germany we have a clear respect for self-determination, human rights and peaceful co-existence."

In his reply His Holiness said: "I very much appreciate your words. Tibet's cause is a just cause; it also concerns our rich culture, the preservation of which is a priority for us. I appreciate your coming to meet me at this small Tibet House.

"Soon after arriving in India in 1959, we set up a Tibet House in New Delhi and later another one in New York. Dagyab Rinpoche here was the Director of Tibet House, New Delhi from 1964 to 1966, and then he came to Germany to work at Bonn University. When he proposed establishing a Tibet House here, I agreed with a view to its preserving Tibetan culture and Buddhist knowledge."

He added that Tibetan culture is a Buddhist culture and that while the Buddhist part is largely of interest to Buddhists on a personal level, culture relates to the community. He pointed out that Tibet's Muslims maintained their own faith purely, while at the same time absorbing much from Tibetan culture. He mentioned that a part of the Haj, the pilgrimage to Mecca involves animal sacrifice. He recalled an old Tibetan Muslim telling him about it, folding his hands and apologizing in clear reflection of the common Tibetan concern for the lives of animals. As a culture of peace and compassion, His Holiness said, Tibetan culture is worth preserving. He added that he is also very concerned about the state of the delicate natural environment of the Land of Snow that has been referred to for its significance to climate change as the Third Pole.

Explaining the source of Tibetan Buddhism as Nalanda University in India. 'As a consequence Tibetan Buddhist traditions possess a rich knowledge of the mind and emotions, which for the last 30 years or so has featured in discussions between modern and Buddhist scientists,' His Holiness said, adding: 'The Mind & Life Institute that has been established in the USA as part of this dialogue is now becoming active in Europe. Even a small place like this Tibet House could be a venue for such meetings.' Turning to Mr Volker he joked:

"Politicians too should know more about the mind and human psychology."

He expressed that the Buddhist literature contained in the Kangyur and Tengyur collections can also be categorised as dealing with Buddhist science and philosophy on the one hand and Buddhist religious practice on the other. Seeing that the science and philosophy sections can be of interest from an independent academic point of view work is going on to extract material about Buddhist science and Buddhist philosophy with the intention of making it available in separate books. The first, a volume dealing with science from Buddhist sources, is complete and a translation into English has already begun.

Among questions His Holiness was asked was an enquiry about what has happened to dialogue between Tibetans and Chinese. He explained that when Deng Xiaoping indicated in 1979 that he was open to talk, Tibetans were prepared, having decided as early as 1974 that they would eventually have to talk to the Chinese and that they would not seek independence.

"We were hopeful of positive developments under Hu Yaobang in the 1980s, but then the Tiananmen incident occurred and hardliners took control. Contacts resumed during Jiang Zemin's leadership in 1993 and were resumed again in 2002. Kelsang Gyaltsen here was one of the delegates to the meetings. However, there was no result. The Chinese continue to accuse us of separatism. The last meeting took place in 2010."

His Holiness also took the opportunity to mention the need to support human rights activist and Nobel Laureate Liu Xiaobo. Recently he has heard of a petition submitted by intellectuals in China seeking Liu Xiaobo's release from prison. His Holiness feels that just as Aung San Suu Kyi benefited from international support during her detention, the same should be provided to Liu Xiaobo.

Asked what Germans can do to help the Tibetan people, His Holiness suggested they visit Tibet, see the situation for themselves and let people know what they find. The Minister-President made a gift of a watch to His Holiness on behalf of himself and his colleagues. Professor Dr Klaus Jork, Honorary President of Tibet House expressed appreciation for His Holiness's visit.

His Holiness ended the meeting saying: "I appreciate your warm feelings and expressions of support. I look forward to Tibet House's flourishing as a centre of learning, contributing to the study of the mind."