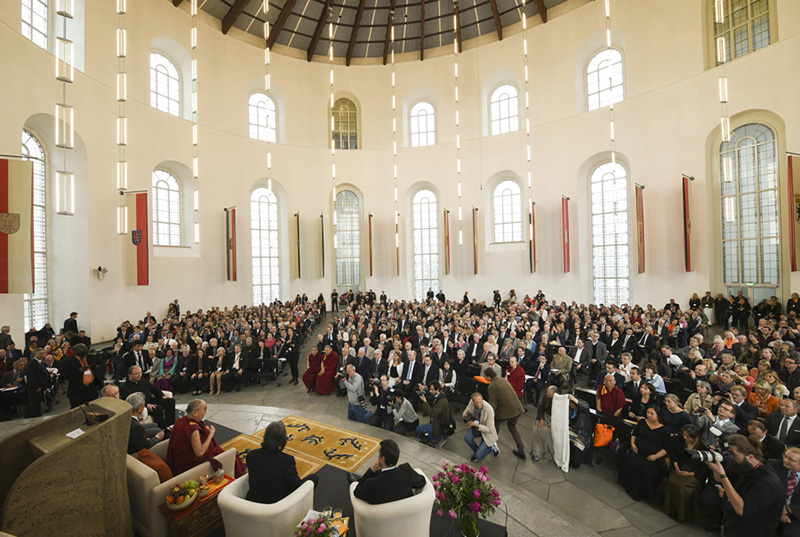 Frankfurt, Germany, 15 May 2014 –In the morning, His Holiness was welcomed and introduced by the Lord Mayor of Frankfurt, Peter Feldmann, who explained that Frankfurt is a tolerant, multi-cultural society of many faiths and many languages. Within such an environment Tibet House makes a prominent constructive contribution to the life of the city. His Holiness responded:

"Respected older brother and younger brothers and sisters, as a human being I am extremely happy to be here."

On Thursday, His Holiness the Dalai Lama held a meeting with local Tibetans in the iconic Museum of Modern Art, which, because of its triangular shape, is called a 'piece of cake'. He opened in characteristically upbeat mood:

His Holiness said that during the 7th century Thonmi Sambhota developed the current Tibetan script and is said to have composed up to eight books of Tibetan grammar. He said that the Tibetan language evolved as Tibetans began to translate Buddhist literature from Sanskrit. These often involved inventing new terms for specific purposes, which means the translations are especially precise and accurate.

He referred to the rich knowledge of the mind and emotions to be found in the Buddhist tradition that derives from the University of Nalanda and the crucial importance of the study of logic and epistemology which have provided tools for study and investigation.

The two remaining events His Holiness attended at the behest of Tibet House Germany took place in St Paul's Church - Paulskirche, a building of symbolic significance. It was started as a Lutheran church in 1789. By 1849, it had become the seat of the Frankfurt Parliament, the first publicly and freely-elected German legislative body. His Holiness met young students in the morning and a bishop and philosopher in the afternoon with which he discussed secular ethics.

In answering questions from students, His Holiness referred to human beings as social creatures who are equipped from birth with the potential for affection. This natural capacity for affection and compassion tends to diminish because the modern education system is geared to materialistic goals rather that the enhancement of inner values.

A student asked His Holiness for his most beautiful moment and he said that as a human being, developing warm-warmheartedness was best, while as a Buddhist working to develop infinite altruism provided him the greatest satisfaction.

When he was asked about how to resolve the difficulties in Ukraine, His Holiness said he was insufficiently informed to comment. However, he said:

"Violence and its unpredictable consequences spell trouble. You might think to only use a little force, but it escalates. Violence may exert control over people physically, but doesn't win over hearts and minds, leaving fear, anger and hatred in its wake."

In the afternoon, His Holiness participated in a panel discussion on the theme 'Ethics Beyond Religion' that was introduced by Dr Eskanderi-Grunberg, Head of the Integration Department of the state government. Fellow participants were philosopher Rainer Forst and Bishop of Trier, Stephan Ackermann. While the discussion wended this way and that into the thickets of philosophy and theology, His Holiness remarked:

"On a practical level, what I've observed in 55 years living in India, the world's most populous democratic country is that despite being a multi-religious, multi-cultural society, because of its commitment to secular values, embodied in its constitution, it has been remarkably stable since independence. Nobody suggests that India's secularism is anti-religious. My approach is to look to scientific findings and common sense."

After a short talk on Friday morning, His Holiness will journey back to India, after a very successful trip through Latvia, Norway, the Netherlands and Germany.