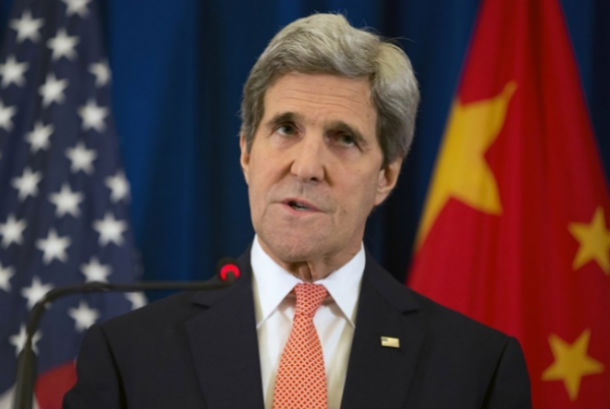 Dharamshala: - US Secretary of State Mr. John Kerry has raised the issue of Tibet and His Holiness the Dalai Lama during his meeting with Chinese State councillor and Foreign Policy Chief Yang Jiechi in Beijing, on 10 July.

A senior State Department official answering queries during a special press briefing said: "The Secretary and Yang discussed the situation in Xinjiang and the treatment of the Uighur minorities, as well as the situation in Tibet, and China's policy towards both Tibet and to the Dalai Lama."

"The Secretary made clear our positions. We certainly recognize Tibet as a part of the PRC, and we reinforced – the Secretary reinforced our view that it is important for China to respect and protect the religious and cultural and the linguistic rights and characteristics of the ethnic minorities, particularly in Tibet and in Xinjiang," he said.

Secretary John Kerry and US Treasury Secretary Jack Lew are in Beijing for the annual US-China Strategic Economic Dialogue. Secretary Kerry earlier met President Xi Jinping and various other senior officials of the Chinese government, in an attempt to repair the strained US-China relationship, following allegations of cyberspying and maritime disputes.

A well-known Tibetan writer Tsering Woeser has said that she and her husband have been placed under house arrest in Beijing, as China plays host to US State Secretary John Kerry for the latest round of US-China talks.

Woeser said on Wedensday that security officers arrived at her Beijing home late on Tuesday, shortly after she and her husband Wang Lixiong returned from a trip.

The Chinese state security officers refused to give a reason for the home detention, but she said she believes it is related to a dinner invitation she received from the US Embassy, possibly to meet Kerry.

Secretary Kerry also expressed his concerns over the deteriorating human rights situation in Tibet during his talks with President Xi Jinping in Beijing on Friday, 14 Feb. 2014.

His comment in Beijing came a day after one more Tibetan set self on fire in Ngaba County, where 35 of the self-immolations have taken place since 2009 to protest against China's repressive policies.

"I emphasized that respect for human rights and the exchange of information in a free manner contributes to the strength of a society in a country. Recent arrests of peaceful advocates for reform run counter, in our judgment, to all of our best interests and the ability to make long term progress. I emphasized that the United States remains concerned about these situations here in China, human rights situations – especially with respect to the Tibetan and Uighur areas," Kerry said.