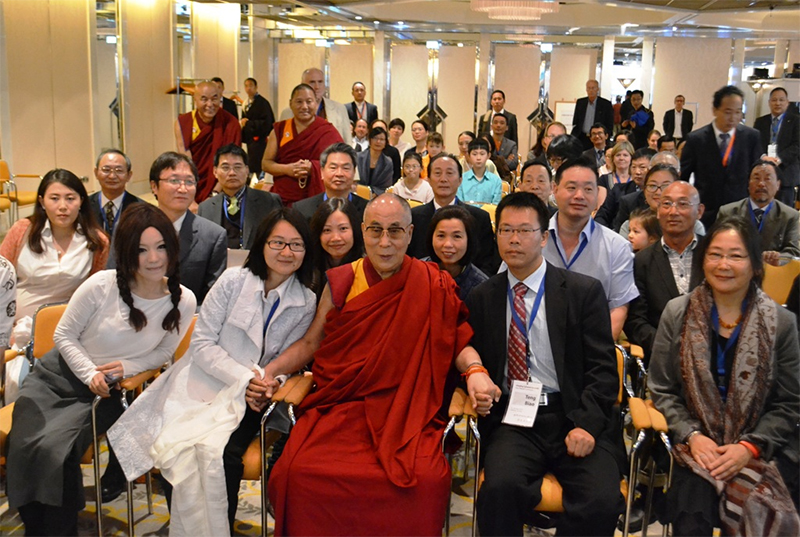 Hamburg - The Sino-Tibetan Conference «Finding Common Ground» concluded in Hamburg, Germany, on 1 September 2014 after having a direct and open discussions and exchanges on the issue of Tibet. The participants from 15 countries who took part at the Conference released a statement of consensus of the conference listed several points including the need to hold the conference «Finding Common Ground» annually.

"Over 70 participants and observers from 15 countries from Europe, the USA, Australia, Asia and Mainland China attended the conference," the Central Tibetan Administration (CTA) said, adding: it is a "Tibetan initiative to set in motion a process of exchange, interaction, cooperation and joint efforts between Tibetans and Chinese stakeholders in the pursuit of a peaceful and just resolution of the Tibet issue."

His Holiness the Dalai Lama the spiritual leader of Tibet met the participants of the conference and made clear that he had always encouraged Tibetans to reach out to Chinese brothers and sisters. In his address at the meeting, he expressed his hope to serve Mainland Chinese Buddhists through Buddhist teachings and the promotion of secular ethics. He also reiterated his longstanding wish to go on a pilgrimage to Wu Tai Shan - a sacred mountain in China for Buddhists.

In conjunction with His visit to Hamburg, His Holiness the Dalai Lama graced the participants with an audience and said, "I give special attention to contacts between the Chinese and Tibetan people and strongly support it. In the 1950s, I had expressed my wish to go to Mount Wutai Shan for a pilgrimage which has not yet materialized, but I still have the desire to go there for a pilgrimage". His Holiness the Dalai Lama further said, "President Xi Jinping said that Buddhism has an important role to play in reviving Chinese culture. Being a Buddhist I can definitely make my contribution to this."

Welcoming all participants, Kalon Dicki Chhoyang, Head of Department for Information and International Relations of the CTA, elaborated on the basic features of the Umaylam - the Middle Way Approach - adopted democratically by the Tibetan people as a policy in seeking a peaceful resolution of the issue of Tibet.

She said the 'Tibet issue is related with the survival of a nationality and the preservation and promotion of its unique identities. The resolution of the Tibet issue is directly related to the interest of China."

In his keynote address, Sikyong Dr Lobsang Sangay, the democratically-elected Tibetan political leader, stressed that "in the long history of peaceful and harmonious relations between Tibet and China, the present tragic state of affairs represents an aberration and exception. This aberration is the consequence of the military occupation of Tibet. The Middle Way Approach represents a realistic and pragmatic way to re-establish genuine friendship and peaceful coexistence between Tibet and China."

“We are encouraged by the Chinese conference participants’ sincere wish to contribute towards restoring freedom and peace in Tibet. We are aware that the Chinese people are subjected to intense Chinese official propaganda and misinformation on Tibet. Despite this, this conference demonstrates there are many Chinese individuals who believe in truth and justice,” Sikyong said after the Chinese participants expressed their support for the Middle Way Approach.

Chinese participants expressed their respect and deep appreciation for Tibetan culture, Buddhism as well as for His Holiness the Dalai Lama. According to them "a peaceful resolution of the Tibet issue is not only the concern of the Tibetans but that it has great relevance in which direction China as a whole moves forward." Consequently, unanimous support for the Middle Way Approach was expressed in a separate statement issued by the Chinese participants. Moreover, Chinese participants stressed the importance of making more information on Tibet in Chinese language available and using modern communication more effectively in reaching out to a wider Chinese audience.

Ms Li Jianglin, scholar on history, in her presentation, delineated the evolution of the nationality policy of the Chinese Communist Government. In the beginning the Chinese Communist accepted and supported the right of people to self-determination. They had the right to choose to join the Federation of China. But gradually they have changed this policy, disregarded the right to self-determination and deleted these from official documents.

The conference which convened by the Tibetan administration based in Dharamshala, India came to the following consensus:

- to support the efforts of the CTA for dialogue with the Chinese Government; the participants gave high appreciation to the ongoing contacts between the Chinese and Tibetan people and considered it important for their aspirations;
- to make efforts that Sino-Tibetan people-to-people dialogue should not be limited to the political sphere, but also include areas of religion, culture and arts;
- to acknowledge that the issue of Tibet is not just the problem of Tibetans, but it has also relevance to the future of both the Chinese and Tibetan people;
- to express grave concerns about the serious human rights violations in Tibet and the deteriorating legal system, democratic development and human rights situation in China;
- to unanimously express recognition and support for the policy of the Middle Way Approach;
- to acknowledge the conference "Finding Common Ground" very meaningful and express that such meetings should be convened annually. It was agreed to form a working group of Tibetans and Chinese for that.