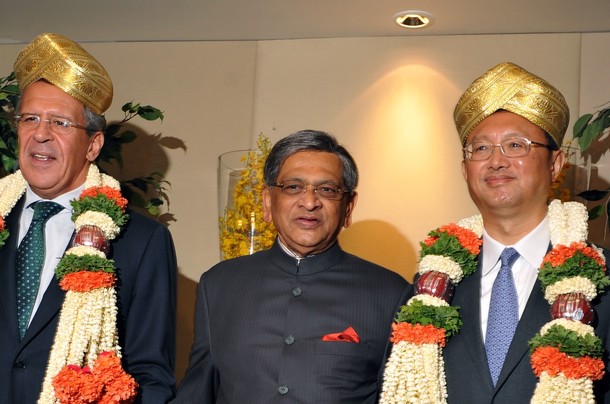 At the height of Indian-Chinese tensions over land disputes and the Tibetan issue, political leaders from the world's two most populated countries are currently engaged in talks to reestablish trust between these once peaceful neighbors and see if any mutual understandings are reachable.

This past week's meeting between Indian Prime Minister Manmohan Singh and his Chinese counterpart Wen Jiabao at the ASEAN summit in Thailand was described by media experts as sober, forthright, and constructive. In his opening address, Wen declared, "We want to have a healthy and steady relationship with India," while Singh offering congratulations to the People's Republic on their 60th anniversary. The two resolved to work on building better understanding at the political level and agreed that differences would not impede their progress.

To further improve the relationship between the two countries, today Bangalore has played host to the Ninth Trilateral Meeting of foreign ministers of India, Russia, and China. In attendance will be Indian External Affairs Minister S.M. Krishna and Chinese Foreign Minister Yang Jiechi. The purposes of the talks between Krishna and Yang will be to "discuss all issues, including differences that persist between the two countries, in an atmosphere of mutual trust and on equal terms," said External Affairs Ministry Spokesperson Vishnu Prakash.

Current tensions between India and China exist over the disputed north Indian state Arunachal Pradesh, which shares a border with China. The Communist Party is arguing that the territory rightfully belongs to China, and has taken exception to the His Holiness the Dalai Lama's upcoming visit there in November. India, likewise, has objected to various Chinese projects in Pakistan-occupied Kashmir, and has expressed concern about the CCP's plans to dam and/or divert water from the Brahmaputra River, which originates in Tibet, and would seriously affect Indian water sources.