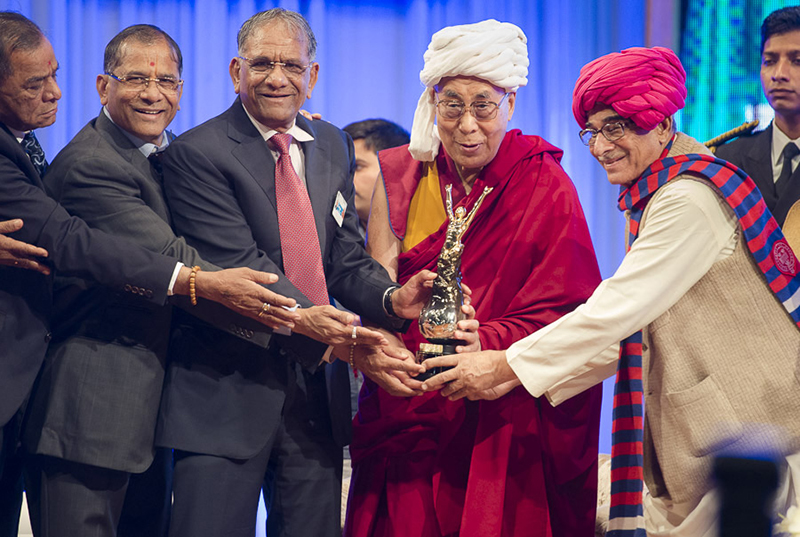 Dharamshala: - The spiritual leader of Tibet His Holiness the Dalai Lama was conferred with the Santokbaa Award for his contribution towards compassion, kindness and world peace.

The Award was conferred to the Tibetan spiritual leader by O P Kohli – Governor of Gujarat State. SRK Foundation established by Govind Dholakia (Founder & Chairman SRK), handed over a cheque worth Rs, 25 lakhs and a Diamond Studded Trophy to His Holiness, on January 2, 2015, in Surat, Gujarat, India.

Addressing the gathering at the ceremony, His Holiness the Dalai Lama said: "whenever I speak in public I consider that we are all the same human beings. I feel it is a great honour you have bestowed on me with the gift of this award. I appreciate this turban, which links a farmer's son from north-east Tibet with a farmer's son from Gujarat."

"Farmers have an essential role in society because it is they who produce the food we all eat. Therefore, it's important that we bring development to our rural areas. The poor who pack the slums in our cities are there because they are unable to make progress in the villages they come from," His Holiness said.

"If life is improved in the rural areas, everyone will benefit. Friends tell me our present mode of development is unsustainable, so we need to find a different approach to uplifting the poor and challenging issues such as caste and gender discrimination," His Holiness said, adding: "We should also explore ways to limit the use of pesticides and artificial fertilizers, seeking more organic farming methods in the interest of health."

Santokbaa Award is given to luminary personalities who have served society with compassion, truth, dedication & selflessness & whose efforts have brought a Smile to other's faces. The award is in memory of SRK Founder Govind Dholakia's late Mother "Santokbaa".

His Holiness, during his two and a half day tour to Surat, also interacted with Indian journalists, students and fellow Tibetans at a seminar organized by SRK Foundation. He also spoke on 'Ethics in Business in Current Century' at a session with prominent business personalities across the country.

Several young journalists asked His Holiness questions, including about religious conversion. His Holiness pointed out that it is much more difficult to convert educated people, so education has a role in this matter. He reiterated that all the major religious traditions have the potential to help humanity through their teachings.

Asked for a message to his own followers, He responded by saying, "Be a good human being."

In relation to social media, His Holiness said they can be helpful or harmful depending on the use to which we put them. He wondered whether they provide people with an excess of information with little depth.

Asked what meditation means to him, His Holiness explained that there are two kinds: the cultivation of single-pointed concentration and the insight that comes from analysis. He said that when he gets up at three in the morning he questions the nature of self, of the world and so forth. Such analysis helps undermine destructive emotions like anger and attachment that are rooted in misconception of self.

Responding to a question, "What do you do in your spare time?" he responded by saying, "I sleep. I'm very fond of sleep," and then added, "even at the age of nearly 80, I continue to read and study."

"Whether any human activity is ethical or not depends on the motivation. If we are driven by a sense of concern for the well-being of other people, our actions will be ethical," His Holiness told industrialists when He was asked about ethics in business during a discussion.

In addition to a positive motivation, His Holiness said "we need wisdom to be able to assess the situation. Contradictions like a tobacco company funding cancer research are irreconcilable, like praying for peace while continuing to support the arms trade."

"Good works should always be voluntary," His Holiness expressed when He was asked whether corporate social responsibility should be voluntary or mandatory. He suggested that once you make rules about such things they become a cover for hypocrisy. He also clarified that actions that ensure the "happiness and well-being of others" can be regarded as "positive and ethical."