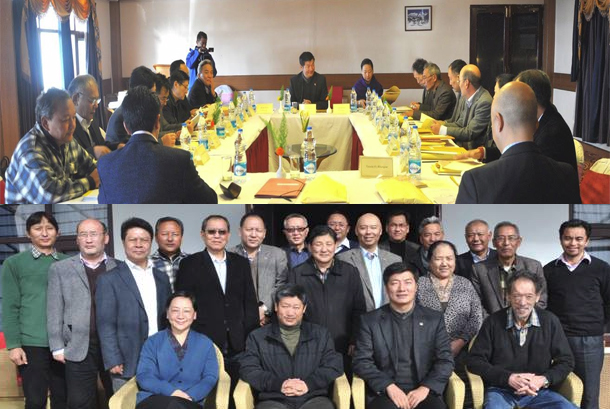 Dharamshala: - A two-day meeting of the Task Force on Sino-Tibetan negotiation concluded on Wednesday in Dharamshala, with a commitment for peaceful resolutions to the issue of Tibet through a meaningful dialogue with the Chinese government.

A statement issued after the meeting said "With deep sense of urgency the meeting also discussed the tragic cases of 135 Tibetan self-immolations in protest against the ongoing repression in Tibet."

"The meeting had "in-depth discussions on the political developments in China, on issues relating to the future of dialogue with the Chinese leadership, and on developments in the international political landscape," they said in the statement.

Dr Lobsang Sangay, who chaired the meeting, reiterated "the Tibetan leadership's commitment for the peaceful resolution of the Tibetan issue through dialogue between envoys of His Holiness the Dalai Lama and representatives of the Chinese leadership. "

This is the 27th Task Force meeting since its inception and 5th meeting since Dr Sangay took political leadership charge of the Central Tibetan Administration.

During the meeting, members discussed and reviewed the overall prevailing situation inside Tibet and the prospects of dialogue process.

"The Tibetan leadership remains firmly committed to non-violence and the Middle Way Approach, and strongly believes that the only way to resolve the issue of Tibet is through dialogue," the statement added.

The Tibetans say the document which was presented to the Chinese government on November 6, 2008 does not seek Tibetan independence, but "Genuine Autonomy" for Tibet as enshrined in the Chinese constitution and Law on Regional National Autonomy.

In the last round of talks - the ninth - held in Beijing in January 2010, the Tibetan side also formally submitted an "explanatory" note to the Chinese leadership to clarify its stand on genuine autonomy for the Tibetan people.

Dr Sangay, the political leader of Tibetans repeatedly stated that envoys of His Holiness the Dalai Lama are ready to engage in meaningful dialogue with the Chinese Government anywhere and at anytime.

The meeting was held in the Himalayan town from January 5 to 6, 2015. Earlier four meetings were held in October 2011, June 2012, and January and September 2013 respectively.

Zhu Weiqun who serves as the executive vice director of the United Front Work Department of the Communist Party of China recently said that the "Middle way Approach" contradicts China's Constitution and the system of regional ethnic autonomy."

The "14th Dalai Lama claims his dictatorship of a "Greater Tibet" covering one fourth of the Chinese territory, namely, the entire Tibet Autonomous Region, Qinghai Province, two autonomous prefectures of Sichuan Province, one autonomous prefecture of Yunan and Gansu respectively,"  Zhu was quoted as saying in the China Tibet Online, on June 9, 2014.

Middle Way Approach neither seeks a "Greater Tibet" nor a "high degree of autonomy", but "Genuine Autonomy" for all Tibetan people under a "single administration," Dr Lobsang Sangay however said in his statement to a conference of Chinese and Tibetans under the theme 'Finding Common Ground.'at Hamburg, Germany, on August 28, 2014.