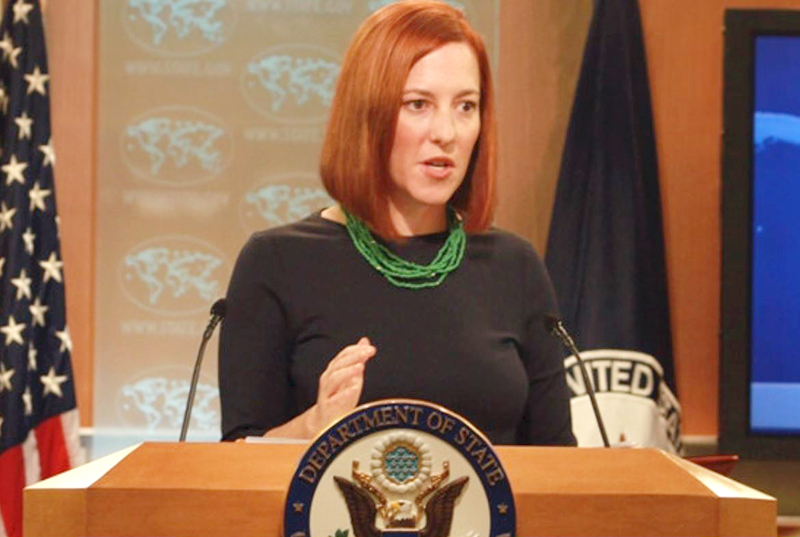 Dharamshala: - The United States said that it has "long encouraged the Chinese Government to hold direct and substantive discussions" with the spiritual leader of Tibet His Holiness the Dalai Lama "without preconditions."

At a news briefing at the State Department, on January 7, 2015, spokesperson Jen Psaki also said: "We believe that all people in the PRC [the People's Republic of China] would benefit from the fruits of dialogue and urge the Chinese Government to seize the opportunity to further engage with the Dalai Lama."

"We've long encouraged the Chinese Government to hold direct and substantive discussions with the Dalai Lama or his representatives without preconditions aimed at resolving differences," Ms Psaki told the briefing when asked to comment on 'reports of exchange of emissaries between the Dalai Lama and the Chinese Government about possibility of talks between the two' sides.

Her comments came after a two-day meeting of the "Task Force on Sino-Tibetan negotiation" concluded in Dharamshala, with a commitment for peaceful resolution of the issue of Tibet through a meaningful dialogue with China.

US President Barack Obama met His Holiness the Dalai Lama at the White House, Feb. 21, 2014 saying the US government supports his "Middle Way" approach to peacefully resolve the issue of Tibet.

The White House said in a statement after the meeting that the US President "reiterated his strong support for the preservation of Tibet's unique religious, cultural, and linguistic traditions and the protection of human rights for Tibetans."

The White House said Obama stressed that he encourages "direct dialogue to resolve long-standing differences and that a dialogue that produces results would be positive for China and Tibetans."