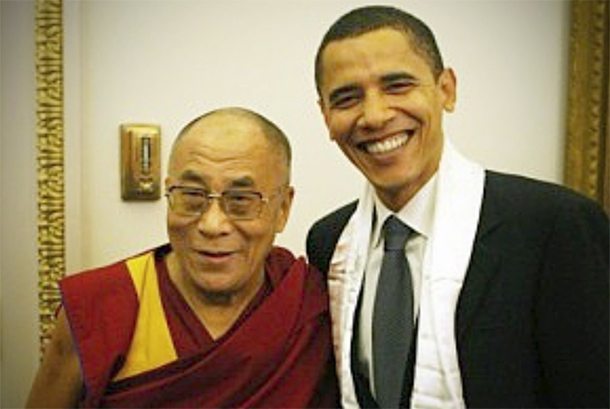 Minneapolis, MN: - The Tibetan National Congress (TNC), an independent Tibetan political party, celebrates what it sees as a tipping-point in closer India-U.S. relations, with critical implications for Tibet.

In a historic visit to India, U.S. President Barack Obama joined Indian Prime Minister Narendra Modi in a landmark joint strategic vision aimed at responding "to diplomatic, economic and security challenges" in Asia-Pacific and the Indian Ocean Region. Numerous reports indicate that the two democratic leaders share unease about China's aggressive moves in the region, and share an interest in a united approach to counter them.

"The Tibetan National Congress is strongly encouraged by the deepening ties between India and the United States," said TNC's Vice President Migmar Dolma. "From the perspective of regional security, it is critical that India and the U.S. enhance their cooperation and address the destabilizing situation in Tibet."

On January 24, PM Modi invited public questions for a joint radio program co-hosted with President Obama using the hashtag #AskObamaModi, TNC launched a social media campaign to tweet the following question: "China's occupation of #Tibet is a regional security threat. How can we resolve it to secure peace? #AskObamaModi". Tibet supporters from around the world re-tweeted the question, making it one of the leading retweets.

"The Chinese occupation of Tibet is the root cause of major security threats to the entire region: the constant danger of Sino-Indian border conflict, trans-boundary water disputes over rivers originating in Tibet, China's interference in Nepal's internal affairs, and undeclared martial law in Tibet due to the ongoing self-immolation crisis," she added, saying "It is only through Tibetan self-rule that these problems can be resolved."

"India and the U.S. share a national interest in resolving the destabilizing Tibet issue, to say nothing of also promoting their values of human rights and democracy," said Dolma. "It is a natural partnership that these two great democracies -- India and the U.S. -- promote their security and their values, by jointly promoting Tibetan self-rule."

Just days after President Obama returned from his historic visit to India, it has been announced that he will appear in public with His Holiness the Dalai Lama for the first time in his presidency. The U.S. President and the Tibetan spiritual leader will appear together on February 5 in Washington, D.C. at the National Prayer Breakfast.

Dolma stated, "This will be the first time that a U.S. President appears in public with the Dalai Lama since President George W. Bush presented His Holiness the Congressional Gold Medal at the Capitol in 2007. This is indeed a recognition of Tibet's importance as a strategic and moral issue, and builds directly on the exciting momentum generated from the Modi-Obama visit."