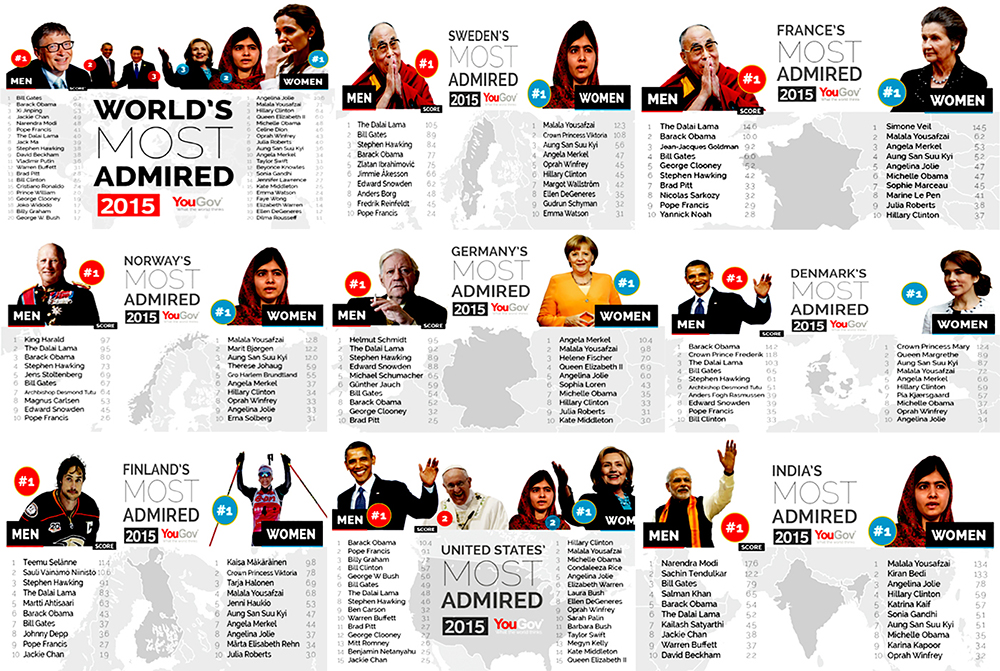 Dharamshala: - The spiritual leader of Tibet, His Holiness the Dalai Lama, is the seventh-most admired man in the world, according to a new poll conducted by YouGov, an international Internet-based market research firm.

The poll, 'World's Most Admired 2015', conducted in December 2014, gathered information from panelists across 34 countries. The questionnaire simply asked, "Thinking about people alive in the world today, which [man or woman] do you most admire?"

These nominations were then used to compile a list of the 25 men and 25 women who received the most nominations and were nominated in at least 2 countries.

His Holiness the Dalai Lama has figured prominently in the list of admired people in all the countries polled except China and Nigeria. He was ranked exceptionally high in most of the European countries including France and Sweden, where he came top. His Holiness was ranked second in Norway and Germany, and third in Denmark.

The list for the most admired man was led by Microsoft founder Bill Gates, known for donating millions of his wealth towards humanitarian causes like education and poverty eradication.

Among the women, the most admired was Hollywood actress Angelina Jolie, who is also a noted humanitarian. Her role as a Special Envoy for the United Nations High Commissioner for Refugees has become particularly visible lately, as the star penned an opinion article for the New York Times on the subject of refugee welfare. Nobel Peace laureate Malala Yousafzai, Hilary Clinton, Queen Elizabeth, Michelle Obama and Ang San Su Kyi were also featured.

All of the surveys were conducted online, and in many countries internet availability is low. The survey therefore can only be said to be representative of the online population, YouGov has explained on its official website.

"The countries where only the online population is polled are China, India, Indonesia, Pakistan, Nigeria, Egypt, Thailand, Saudi Arabia, Malaysia, Australia, United Arab Emirates, Hong Kong and Singapore. In the remaining countries the surveys can be considered nationally representative," it has stated.