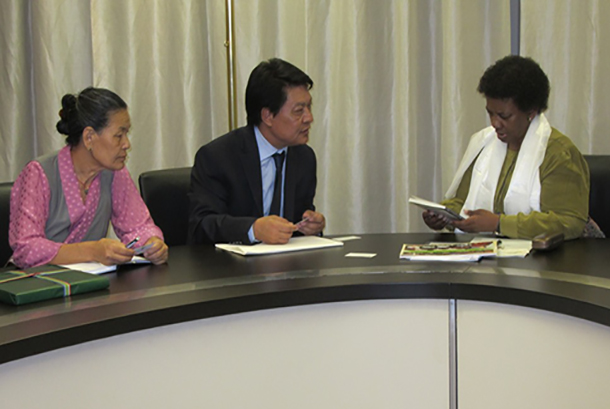 Dharamshala: - Secretary for the Central Tibetan Administration's Department of Information and International Relations (DIIR) Tashi Phuntsok met with Deputy Foreign Minister of South Africa Nomaindia Mfeketo on 9 February for a constructive discussion on the future of Tibet.

The 45 minute meeting was convened at Mfeketo's political office in Johannesburg, South Africa. Phuntsok was accompanied by Nangsa Chodon, Representative for the Office of Tibet, South Africa and Guy Lieberman, a long-standing member of the Friends of Tibet movement.

"Phuntsok outlined the Middle Way Approach of the Central Tibetan Association (CTA) in resolving the ongoing struggle of Tibet, drawing attention to the repressive rule of Tibetans under China," according to a Tibetan official media report.

The Middle Way Approach attempts to establish a non-partisan and moderate status for Tibetans through non-violent means that protects the autonomy of their culture, religion and national identity. Phuntsok stressed the need for increased international support for the Approach.

Mfeketo reassured Phuntsok with the need for dialogue, discussion and perseverance in the efforts of Tibet, and likened its struggle to the experience of black South Africans under apartheid.

Phuntsok also briefed Mfeketo on the schedule of His Holiness the Dalai Lama, who met with Obama at the National Prayer Breakfast in Washington on 5 February, a meeting which angered Beijing political officials. Hong Lei, the Chinese Foreign Ministry spokesman, stated: "We oppose any foreign country allowing the Dalai Lama to visit, and oppose any country using the issue of Tibet to interfere in China's internal affairs."

Regardless of China's dissatisfaction towards the meeting of Obama and His Holiness, Mfeketo expressed to Phuntsok her desire for South Africa's relationship with Tibet to continue.