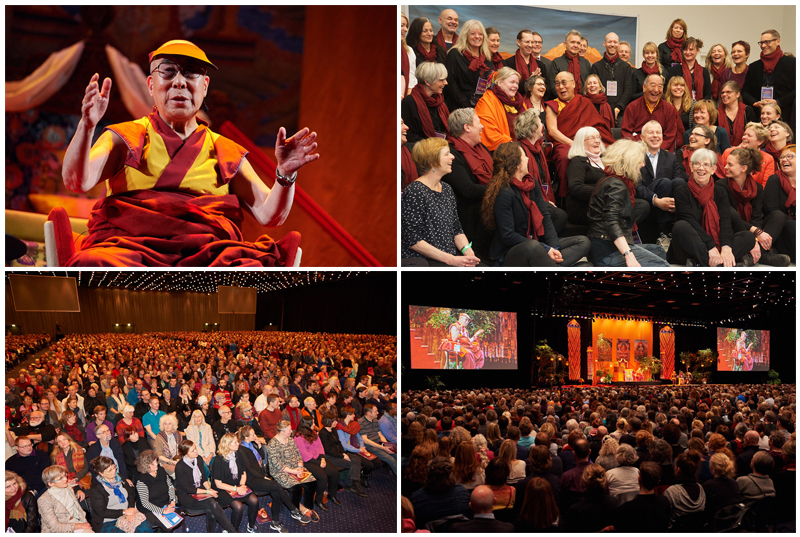 Copenhagen, Denmark: - The spiritual leader of Tibet His Holiness the Dalai Lama said "there are increasing scientific findings that both our physical and mental well-being depend on our peace of mind."

His Holiness on Wednesday February 11 spoke at the at the Bella Conference Center in Copenhagen, capital of Denmark, with the topic being ‘Strength Through Compassion and Connection’.

His Holiness was introduced by Lakha Lama Rinpoche, chairman of the association of seven organizations who invited him and arranged the visit.

The first engagement in Copenhagen was a meeting with members of the press.  His Holiness told the media that they "should have long noses like elephants, able to sniff out what is going on and then informing the public. However, it is also essential that you are truthful and honest about it.”

His Holiness said that the Danish government's reluctance to meet him during a visit to Denmark was "logical" since his retirement meant he had "nothing to ask" politicians.

"I think it's quite logical. I have no political responsibility so even if I met some political leaders I have nothing to ask," Nobel Peace Prize Laureate -- who retired from politics in 2011 -- said at the press conference in the capital.

"The purpose of our lives is to be happy. We live in hope, which means looking forward to something good. And there are increasing scientific findings that both our physical and mental well-being depend on our peace of mind. Clearly stress is bad for our health," he added.

He said “scientists are also finding evidence that small children respond more positively to helping than hindering, which reveals that basic human nature is to be affectionate and helpful. Love brings us together, anger pushes us apart.”

His Holiness explained that 'many of the problems we face in the world today are due to a lack of values, of moral principles.'

He spoke of 'the need to introduce such values into the education system taking a secular approach that, following the Indian example, is respectful of all religious traditions without being biased to one or the other.'

"Taking care of others as well as yourself is the wise way to fulfil your own interests. He pointed out that in the past Danish people may have been self-sufficient, but today the whole world is interdependent," he said, adding that "we cannot think only of ourselves, but have to consider the welfare of all 7 billion human beings."

“If we look back on the 20th century there were many marvelous developments, but it was also a period of unprecedented bloodshed. It’s estimated 200 million died in violence," he said.

"To change the world for the better, complaining is not enough, prayer is not enough; we need a long-term vision implemented in a systematic way," he noted, saying that "this will depend on those who are not yet 30 years old now, the generation of the 21st century."

"It will take time, but if we start to make an attempt now, it may be possible to create a better world by the end of this century," he explained.

His Holiness said he believes that "it is possible to do this by changing the way people think based on common sense, common experience and scientific understanding.”

His Holiness ended his talk with 'the hope that his listeners would think about it and if it made sense try to act on it. If on the other hand they felt it was unrealistic, they could just forget it.'

While answering questions from the audience the Tibetan leader signed a steady stream of brochures and books that were handed up at the front of the stage.

Before leaving to appreciative applause, His Holiness said he looked forward to meeting again tomorrow when he would explain the ‘Eight Verses for Training the Mind’.